US officials have brought charges against Boston Marathon bombing suspect Dzohkhar Tsarnaev while he lay in his hospital bed, a federal court official said.

“There has been a sealed complaint filed,” said Gary Wente, circuit executive for the US Courts for the First Circuit, who said that a magistrate judge was present when Tsarnaev was charged at his bed in Beth Israel Deaconess Hospital on Monday.

He was charged with using a weapon of mass destruction and one count of malicious destruction of property resulting in death.

Officials say Tsarnaev and his older brother and suspected co-conspirator, Tamerlan Tsarnaev, set off the twin explosions at the marathon one week ago, killing three people and injuring more than 180 others.

Dzhokhar Tsarnaev remained unable to speak with a gunshot wound to the throat, and he was expected face separate state charges in the fatal shooting of a university police officer.

“There have been widely published reports that he is [communicating silently]. I wouldn’t dispute that, but I don’t have any specific information on that myself,” Boston Police Commissioner Ed Davis told CNN on Sunday. “We’re very anxious to talk to him and the investigators will be doing that as soon as possible.”

The White House said that the surviving suspect in the Boston bombings would not be treated as an “enemy combatant” but would be tried through the US civilian justice system.

“He will not be treated as an enemy combatant,” Jay Carney, the White House spokesperson, said following calls from some Republicans for 19-year-old Dzhokhar Tsarnaev to be granted the same status as “War on Terror” detainees.

“We will prosecute this terrorist through our civilian system of justice,” Carney said, arguing that US law prohibited a US citizen being tried in the military court system.

Carney said that since the September 11, 2001 attacks the US government had repeatedly and successfully used civilian courts to try terror suspects.

“The system has repeatedly proven that it can successfully handle the threat we continue to face,” Carney said.

Dzhokhar Tsarnaev, 19, was captured with throat injuries that, coupled with sedatives administered at the Boston hospital where he is being treated, had left him incapable of speech and initially prevented authorities from questioning him.

Tsarnaev’s capture on Friday night ended a manhunt that virtually shut down greater Boston for about 20 hours. His older brother, Tamerlan Tsarnaev, 26, was pronounced dead after a gunfight with police a day earlier.

Investigators are seeking, among other things, to determine whether the two suspects acted alone.

Boston’s police commissioner and mayor have both said they believed the brothers were on their own.

“I am confident that they were the two major actors in the violence that occurred,” Ed Davis, the police commissioner, told CNN on Sunday ahead of the charges.

Davis also said investigators have discovered at least four undetonated devices, one of them similar to the two pressure cooker bombs set off at the Boston Marathon, and that he believed the suspects were planning additional attacks.

Still, much of investigators’ attention has focused on a trip to Russia last year by Tamerlan Tsarnaev.

The brothers emigrated to the United States a decade ago from Dagestan, a predominantly Muslim region in Russia’s Caucasus.

Neighbours in Makhachkala, the region’s capital city, said he kept a low profile while visiting there last summer, helping his father renovate an apartment unit.

That trip, combined with Russian interest in Tamerlan communicated to US authorities and an FBI interview of him in 2011, have raised questions whether danger signals were missed.

A group leading the armed struggle against Russia said on Sunday it was not at war with the United States, distancing itself from the Boston bombings. The conflict is rooted in two separatist wars that Russian troops waged against Chechen separatists following the fall of the Soviet Union. 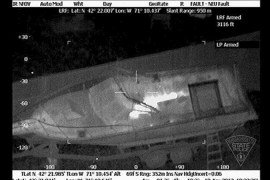 Dzhokhar said to be in stable condition as city police chief reveals the Tsarnaev brothers had a large cache of weapons. 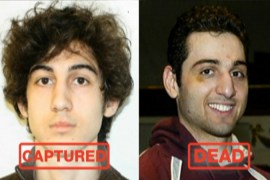 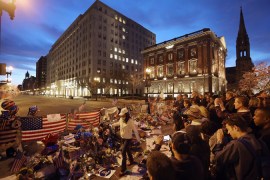 Surviving suspect of Marathon blasts in “serious condition” and unable to speak due to throat injuries, authorities say. 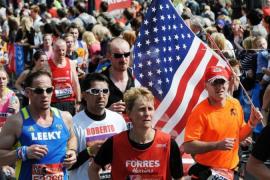 Mood festive and defiant as estimated 36,000 runners show solidarity with those killed in US this week.