Voters in Paraguay have cast ballots to choose a new president and try to turn the page on a political crisis that saw the impeachment of leftist president Fernando Lugo nearly a year ago.

The mostly rural country of 6.5 million bordering Brazil, Argentina and Bolivia is seeking a replacement for Lugo, a former Roman Catholic bishop turned politician who was ousted in June 2012 by the opposition-controlled legislature after a police eviction of farmers left 17 people dead.

The leftist coalition that swept Lugo to power in 2008 has split, but Lugo is on the ballot again, this time running for a Senate seat.

Both Cartes and Alegre vow to carry out agrarian reform and lure private capital to Paraguay, where nearly 40 percent of the people are poor.

The South American nation relies on soy and beef exports and is a hotbed of contraband trade.

During the campaign Alegre, a self-styled crusader against crime and corruption, highlighted Cartes’s brief 1985 jail stint for his role in a currency smuggling affair, while Cartes accused Alegre of embezzling $25m in government funds.

A Cartes victory would mean the return to power of the Colorado Party, which ruled the country for 61 years but has been out of power since 2008.

The conservative party was the pillar of support for dictator Alfredo Stroessner, who held power from 1954 to 1989.

Cartes, one of the country’s wealthiest men, did not join the party until 2009, and says he only voted for the first time the following year.

If the center-right Colorados win on Sunday, Paraguay will buck the trend in South America where leftists have made steady gains in recent years. Only Colombia and Chile are now led by conservatives.

The leftist bloc is especially strong within the Mercosur trade group, whose members include Brazil, Argentina, Uruguay and Venezuela.

Mercosur suspended Paraguay after Lugo’s impeachment and brought in socialist Venezuela, even though its inclusion was never approved by the Paraguayan Congress.

Paraguay is plagued by corruption, drug-trafficking, smuggling, and pirating of copyrighted materials like music and movies.

Since Lugo’s impeachment the country has been led by Liberal Party member Federico Franco, who is not running for re-election.

Most Latin American countries saw the impeachment as a legislative coup d’etat, and Paraguay’s membership in the Mercosur common trade bloc and the Unasur regional group has been suspended. 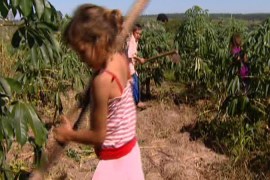 Hopes grow for farmers ahead of Paraguay poll 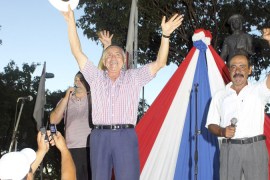 Presidential hopeful, Lino Oviedo, was killed in a helicopter crash in the north of the country. 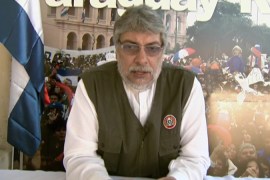