The shallow quake hit near the city of Ya’an, on the edge of the Tibetan Plateau, just after 8am (00:00 GMT) on Saturday and injured at least 6,000 people. The conditons of at least 147 of them were in a serious.

The earthquake, which set off landslides and destroyed buildings, occurred close to where a big earthquake killed almost 70,000 people in 2008. It was followed by several aftershocks.

President Xi Jinping and Premier Li Keqiang said all efforts must be put into rescuing victims to limit the death toll.

Li was on his way to Ya’an, state media said.

“The current most urgent issue is grasping the first 24 hours since the quake’s occurrence, the golden time for saving lives,” Xinhua quoted Li as saying.

Xinhua said 6,000 troops were heading to the area to help with rescue efforts.

State television CCTV said only emergency vehicles were being allowed into Ya’an, though Chengdu airport
had reopened.

Most of the deaths were concentrated in Lushan, where water and electricity were cut off.

In an interview with Al Jazeera, Kevin Xia, information officer of Red Cross and Red Crescent in Sichuan, said that area where the earthquake hit is still cutoff and the victims need urgent care.

“This is a mountainous area so it is a challenge for relief work and the distribution of relief materials,” Xia said.

Local seismologists registered the quake at magnitude 7.0 while the US Geological Survey gave it as 6.6 at a depth of 12km. It was followed by several aftershocks.

Rescue workers heading for the quake zone were struggling to clear roads that had been blocked by debris, CCTV reported.

“There are mountains on all sides, it is very easy to trigger mudslides and very dangerous,” one user wrote on the microblogging service Sina Weibo, China’s version of Twitter.

The tremors were felt several hundred kilometres to the east of the epicentre in the city of Chongqing, which is home to about 30 million people. Xinhua showed images of residents outside their apartment buildings after fleeing the shaking.

The military set up a relief and rescue headquarters and medical relief team for the quake-hit region.

Rescue workers turned a square outside the Lushan’s county hospital into a triage centre with medical personnel treating the wounded, according to footage on China Central Television.

Hard-hit parts of the county remained unreachable by road and phone services were cut off, but some text and internet services worked, state media said.

A Sina Weibo user, posting a Lushan geotag, said that many buildings had collapsed and that people could see helicopters hovering above.

Aerial photos issued by China’s military and shown on state television showed houses in ruins and villages flattened into rubble. 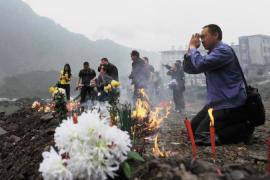 Survivors continue to struggle with aftermath of most devastating disaster in country’s recent history. 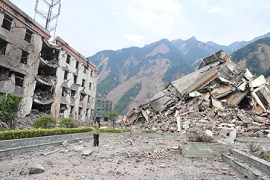 Survivors try to return to normality as more than 55,000 confirmed dead.