The Malian city of Timbuktu is on high alert, after deadly clashes erupted there over the weekend.

Malian soldiers were going house to house on Monday, searching for rebels. At least three fighters were reportedly killed.

Al Jazeera’s Mohamed Vall, reporting from the northern town of Kidal, said fighters from unidentified armed groups had entered a house next to the central military headquarters inside Timbuktu and were besieged by the Malian army.

“According to our source, a French aircraft bombardment that house and it’s believed the fighters were killed in the air raid,” he said. “We understand that some Malian soldiers have also been killed.”

The French Defence Ministry said in a statement that jets flew over the city to hunt down fighters, who attempted to flee in the northwest direction. One French soldier was injured during the fighting, the statement said.

Rebels – who had controlled Timbuktu along with other key northern Mali cities for nearly 10 months until being driven out in January – used the confusion created by a suicide bomber late on Saturday to infiltrate the city.

Having slipped into the ancient caravan town, the fighters engaged French and Malian troops in a day-long battle on Sunday.

A spokesman for al-Qaeda in the Islamic Maghreb issued a statement on the al-Sharq website in Mauritania, saying that the attack on Timbuktu was led by an Algerian suicide bomber, belonging to the Yusuf bin Tashfin brigade, a platoon under the command of late Abou Zeid, who was killed last month by French forces.

Captain Samba Coulibaly, spokesman for the Malian military in Timbuktu, said a total of 11 rebels had been killed since the attack started with a suicide bombing at an army checkpoint late Saturday night.

France launched a military operation in January against al-Qaeda-linked groups occupying the north of the country.

The French-led operation has forced the fighters from the cities they seized in the chaotic aftermath of a military coup that overthrew Mali’s government in March 2012. 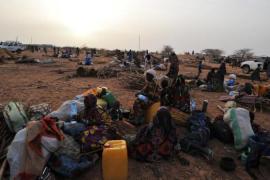