A French family of seven kidnapped by the Nigerian armed group, Boko Haram, in Cameroon in February have been freed and are in the hands of officials in the central African state, President Paul Biya has said.

He made the announcement in a statement read on national radio on Friday which said the hostages – a father, mother, four children aged 5 to 12, and an uncle – had been “handed over last night to Cameroonian authorities”.

French President Francois Hollande said on Friday that no ransom had been paid the family’s release. Speaking in Paris he said that France “does not cede on [its] principles”, the “non-payment by France of ransoms.”

The French government said in a statement also on Friday that all members of the family were in good health and had reached the Cameroonian capital, Yaounde.

The Cameroonian and Nigerian authorities were also thanked but the statement also highlighted that another eight hostages were still being held.

“The president would like to remind all that there are eight further French citizens detained in the Sahel,” the statement said.

The family was to be returned to France on Saturday, French officials said.

The freed family was seized by Boko Haram on February 19 while visiting a national park in northern Cameroon.

They are believed to have then been taken over the border into Nigeria’s conflict-prone northeast.

The French gas group GDF Suez has identified the captives as an employee working in Yaounde and his family.

They were vacationing in northern Cameroon, near the border with Nigeria, according to Associated Press news agency..

Boko Haram last month ran an audio recording of Tanguy Moulin-Fournier, the father, in which he seemingly asked Biya to free detained members of the group.

Boko Haram is believed to include a number of factions with various interests and shifting demands.

The group has in the past called for the creation of an Islamic state in Nigeria, where corruption is deeply rooted  and most of the population lives on less than $2 per day despite its vast oil reserves. 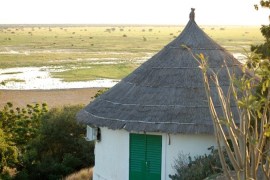 Kidnappers have reportedly moved four adults and three children, seized while on holiday, across border to Nigeria.