North Korea is marking the 101st anniversary of its founder’s birth, as tensions continue over the country’s nuclear programme.

Thousands of North Koreans attended the mass rally in the capital Pyongyang on Monday, to celebrate the centenary of the birth of founding president Kim Il-sung, grandfather of current leader Kim Jong-un.


In photos distributed by North Korea’s official news agency, soldiers, workers and students were seen standing and offering flowers before the statues of the founder and his son, late leader Kim Jong-il.

The third Kim to rule in Pyongyang ealier attended a midnight celebration of his father and grandfather’s rule with top officials including his uncle Jang Song-thaek and the country’s top generals.

The South Korean government said it was monitoring its neighbour closely, but discounted speculation that the North would proceed with a launch or a new nuclear test on the anniversary itself.

“North Korea is not believed to have launched a missile on the occasion of the Day of the Sun [country’s national holiday], of which today’s is the 101st,” defence ministry spokesman Kim Min-seok told a briefing.

“But the military is not easing up on its vigilance on the activities of the North’s military with the view that they can conduct a provocation at any time”.

For weeks leading up to the April 15 celebration, the North has threatened to attack the United States, South Korea and Japan since new UN sanctions were imposed in response to its latest nuclear arms test in February.

Speculation has mounted of a new missile launch or nuclear test in a bid to either force Washington to hold talks with Pyongyang or to shore up the leadership of the younger Kim.

In Tokyo on Monday, Prime Minister Shinzo Abe and US Secretary of State John Kerry said they were willing to engage with the North, if Pyongyang took steps towards de-nuclearisation.

Meanwhile, the South Korean Unification Ministry, which oversees relations with the North, said it was “regrettable” that the North had rejected an offer of talks, but insisted the offer remained on the table.

Missile launches and nuclear tests by North Korea are both banned under UN Security Council resolutions, that were expanded after its third nuclear test, in February.

The aim of the North’s aggressive acts, analysts said, is to bolster the leadership of the younger Kim, or to force the US to hold talks with the North.

The Chinese Communist Party mouthpiece, the People’s Daily, said on Monday that tensions could get out of control.

“Bad things will always happen if a bowstring is drawn for too long,” the paper wrote in a commentary.

North Korea has repeatedly stressed that it fears the US wants to invade it and has manipulated the United Nations to weaken it.

“We will expand in quantity our nuclear weapons capability, which is the treasure of a unified Korea … that we would never barter at any price,” Kim Yong-nam, North Korea’s titular head of state, told a gathering of officials and service personnel applauding the achievements of Kim Il-sung. 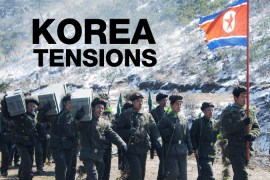 Al Jazeera looks at the escalation of military threats between N Korea and geopolitical rivals. 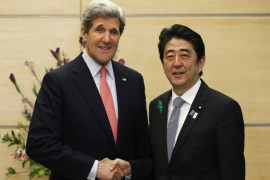 Kerry says US ‘ready for talks’ with N Korea

Secretary of state says US prepared to “reach out” to Pyongyang if North Korea takes steps to give up nuclear weapons. 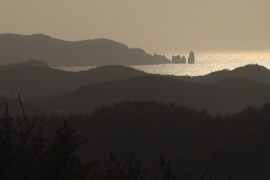