A wave of violence that began on March 20 saw mosques and homes burned in several towns in Meiktila, central Myanmar, leaving at least 43 dead and prompting the government to impose emergency rule and curfews in some areas.

Satellite images analysed by Human Rights Watch show the scale of the destruction in Meiktila.

“Areas with near total destruction were concentrated within three locations in Meiktila measuring more than 24 hectares in total area west and northeast of the city’s main market,” Human Rights Watch said on their website on Monday.

Thein Sein said in a radio address on Sunday: “Some members of the public have killed and committed arson in the spirit of anger rather than be governed by the law and their actions have tarnished the country’s image on the world stage”.

The former general added that such incidents would “badly harm the country’s dignity” with the international community and warned that Myanmar’s fledgling democratic transition could be destabilised by the communal fighting.

The United States and United Nations are among those that have voiced alarm about the clashes, which were the worst sectarian strife since violence between Buddhists and Muslims in the western state of Rakhine last year left at least 180 people dead.

Thein Sein vowed a tough response to the fighting in a speech on Thursday, his first public address over the violence, which he attributed to “political opportunists and religious extremists”.

The situation has since appeared to have been calm although thousands remain homeless.

Rioting was apparently triggered by an argument in a gold shop that turned into a mass brawl, but witnesses say the wave of violence in other central Myanmar towns since then appears to have been organised.

The conflict poses a major challenge to Thein Sein, who has won international praise for his reform efforts since taking office in 2011 following the end of decades of outright military rule.

Myanmar’s Muslims – largely of Indian, Chinese and Bangladeshi descent – account for an estimated four percent of the population of roughly 60 million.

Myanmar on Friday strongly rejected suggestions of state links to the unrest from the UN’s human rights envoy to the country, Tomas Ojea Quintana, who cited the reluctance of security forces to crack down on rioters.

The Organisation of Islamic Co-operation said on Saturday that member states will meet on April 14 in Saudi Arabia to discuss violence against Muslims in Myanmar. 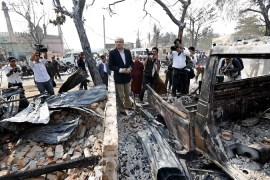 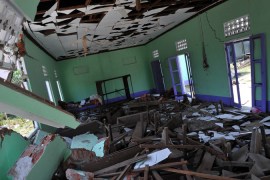 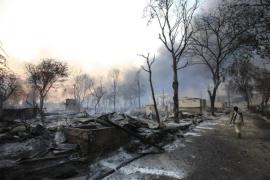 Reform, riot and return in Myanmar

Another riot between Muslims and Buddhists erupted in Myanmar. Was questionable nature of violence being plotted?