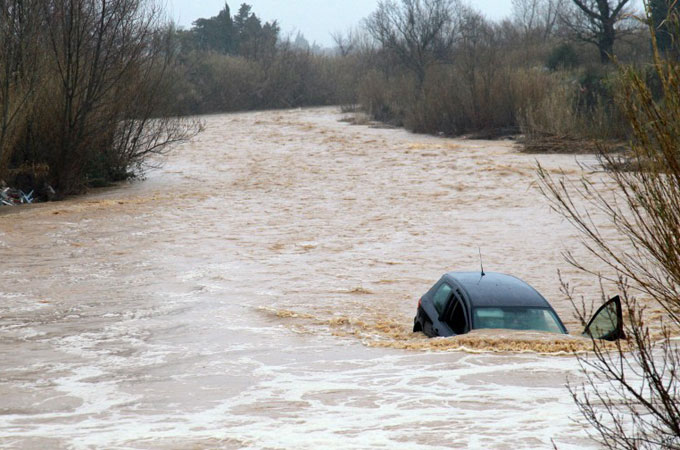 A car caught up in the floodwaters of what was a relatively small stream near Perpignan in the south of France. [AFP]

Torrential downpours have brought flooding to parts of southern France that have killed at least 15 people. There are also 12 people still unaccounted for.

Just a week ago the weather across much of western Europe was cool, dry and settled, thanks to a large area of high pressure which was keeping Atlantic weather systems at bay. However, during the last few days the high has drifted east allowing milder weather to move in from the west.

As is usually the case at this time of year, milder weather also means wetter weather and this has certainly been the case on this occasion. Storms arrived here with a vengeance, initially moving across Portugal and Spain before spilling into the western side of the Mediterranean Sea.

Perpignan in southern France recorded 79mm of rain in the 24 hours going into Thursday morning. This amounts to more than twice the March average of 34mm for the entire month.

The worst of the rain has now eased and the unsettled weather has extended further north and east. In the process we have seen temperatures climb nicely into the low to mid-teens across much of the continent.

There is still some snow in the forecast, but that has become increasingly confined to northeastern Europe where the rain is running into the colder air. Interestingly, winter isn’t over just yet.

By early next week, our area of high pressure is expected to drift back towards the UK, heralding a return of colder weather, possibly with some snow for much of northern Europe. The UK, Scandinavia along with western Russia can all expect to feel noticeably colder once again.