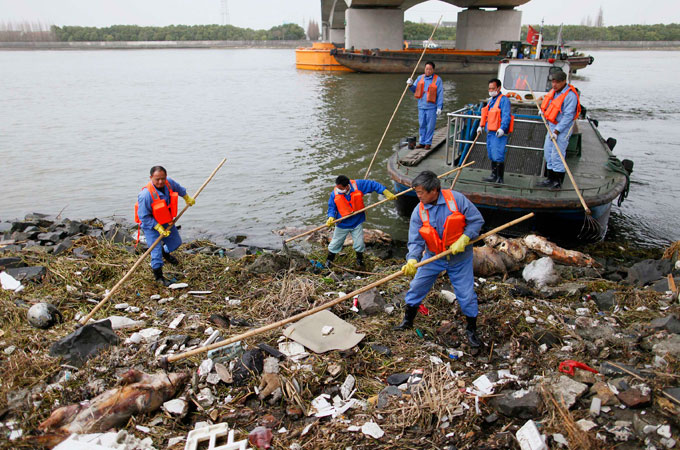 Pig carcasses being retrieved from the Huangpu river near SHanghai. [Reuters]

In a survey, released by the country’s Ministries of Water Resources and Statistics, the number of recorded rivers with catchment areas of over 100 square kilometres had fallen to just under 23,000 compared with a figure of 50,000 in the 1990s.

These figures come at a time when the government is still trying to explain the discovery, earlier this month, of 16,000 pig carcasses, floating along the Huangpu River, which supplies much of Shanghai with its drinking water.  In the last week 1,000 dead ducks were found dumped in the Nanhe River in Sichuan province.

Official explanations for the discrepancy have placed the blame on errors made by earlier cartographers and also climate change. Yet many of the rivers have simply dried up and water, or the lack of it, has been a major problem in China for many years.

China is one of the 13 countries most affected by water shortages, according to the United Nations.

A report in 2007 highlighted that water shortages affected two thirds of China’s cities with 110 of them suffering severe shortage.

People fair no better in the countryside. In 2009, the World Bank stated that 300 million people in rural areas lacked access to safe drinking water.

The problem is made much worse by China’s burgeoning economy and the demands for water from industry and agriculture. According to Ma Jun, of the Institute of Public and Environmental Affairs the disappearance of the rivers highlighted the need for more sustainable development.

“…the disappearance of rivers is a reality. It is really happening in China because of the over-exploitation of river resources. One of the major reasons is the over-exploitation of the underground water reserves, while environmental destruction is another reason, because desertification of forests has caused a rainfall shortage in the mountain areas.”

Throughout its history China has struggled to deal with both drought and flooding.

The Central China floods of 1931 are thought to have killed anywhere between 145,000 and 4 million.

In the Great Famine of 1958-1961, which was partly the result of severe drought, around 15 million people died.

The construction of the Three Gorges dam across the Yangtze river, completed in 2008 is an example of the country’s desire to control and moderate the impact of weather. At the same time, the dam resulted in the world’s largest hydroelectric power station serving the demands of the rapidly expanding industrial sector.

Therein, of course, lies the dilemma; many rivers and tributaries have been diverted to power the turbines. Ancient waterways have dried up or flows have been seriously restricted.

The Chinese leadership seems to be aware of the issue, perhaps fearing it may be a political catalyst for social unrest.

In a recent speech, the country’s new Premier, Li Keqiang said, “We must take steps in advance, rather than hurry to handle these issues when they have caused a disturbance in society.”

With more than 20 million people currently affected by drought in Yunnan, Gunsu and Sichuan provinces the management of its dwindling water resources is likely to remain a major challenge in the years ahead.