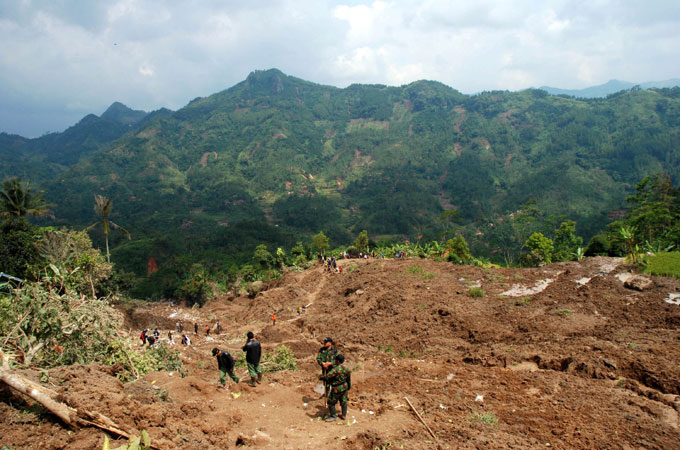 Search and rescue officers and military personnel look for victims of the landslide at the Muka Payung village in Cililin, Bandung [AFP]

A landslide has been triggered by torrential rainfall on Indonesia’s main island of Java. At least eight people are known to have died with nine others still missing.

Semarang in Central Java had 57mm of rain on Monday, and the heavy rain has been on-going for over three days now. The landslide occurred at the Muka Payung village in Cililin in west Bandung district.

Nine houses were buried when mud gushed down from surrounding hills just after dawn on Monday. Indonesian search and rescue officers and military personnel are still looking for victims according to a disaster official.

Rescue attempts have been hampered by a lack of equipment. Over 300 policemen, soldiers and residents had to use shovels, hoes and their bare hands to search through the debris for the missing.

Seasonal downpours cause dozens of landslides and flashfloods each year in Indonesia. The country’s National Disaster Mitigation Agency said that 83 people have died from 54 landslides so far this year.