US President Barack Obama has wrapped up his four-day Middle East tour, visiting historic sites in Jordan before heading back to the United States.

Before heading to Petra, Obama used the stop in Jordan to ratchet up criticism of Syrian President Bashar al-Assad, stopping short of promising military aid to Syrian rebels in a two-year-old civil war that has claimed, according to UN estimates, 70,000 lives.

The US president arrived in Amman on Friday, after an unexpected diplomatic victory in Israel, where he announced the breakthrough in Israel-Turkey ties, which have been severed since Israel killed nine Turkish citizens in a 2010 naval raid on a Gaza-bound flotilla.

Binyamin Netanyahu, the Israeli prime minister, apologised on behalf of his country for the incident, and the two US allies agreed to normalise relations.

The rapprochement could help Washington marshal regional efforts to contain spillover from the Syrian civil war and ease Israel’s diplomatic isolation in the Middle East as it faces challenges posed by Iran’s nuclear programme.

During his visit, Obama appeared to have made some headway in easing Israelis’ suspicions of him, calming their concerns about his commitment to confronting Iran and soothing his relationship with the hawkish Netanyahu.

Obama attempted to show Palestinians he had not forgotten their aspirations for statehood but he left many disappointed that he had backtracked from his previous demands for a halt to Israeli settlement building in the occupied West Bank.

The president offered no new peace proposals but he promised his administration would stay engaged while putting the onus on the two sides to set aside mutual distrust and restart long-dormant negotiations – a step the president failed to bring about in his first term.

Secretary of State John Kerry was due to meet Palestinian President Mahmoud Abbas in Amman and then fly to Jerusalem to see Netanyahu on Saturday night as part of a push to get the two sides back to the table.

On the last leg of his trip, Obama also promised further humanitarian aid in talks with Jordan’s King Abdullah, a close ally, as the economically strapped country grapples with a refugee crisis caused by Syria’s civil war. 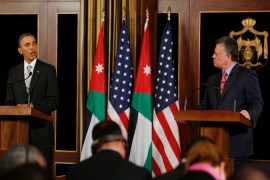 Syria conflict figures in talks between the two heads of state, as thousands of refugees continue to pour into Jordan. 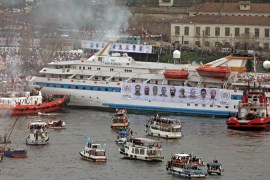 Binyamin Netanyahu tells Turkish PM Recep Erdogan that families of those killed aboard Mavi Marmara will be compensated. 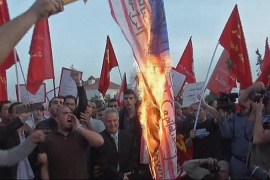 Protests held in Jordan ahead of Obama visit

Tens of protesters chant “USA go away” and “Obama go away” on eve of US president’s visit.