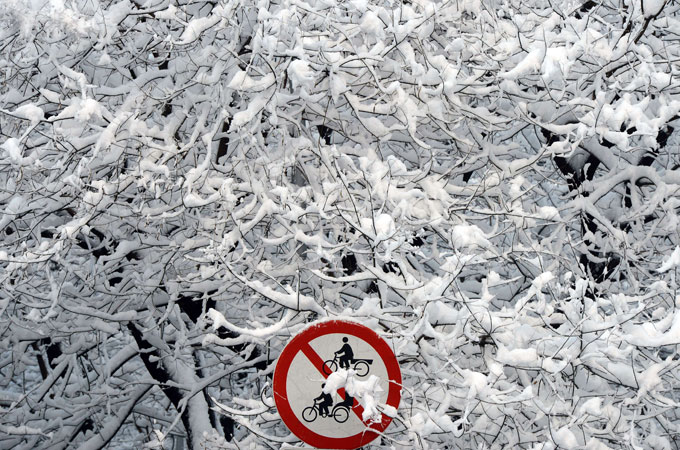 Much of northern China including Beijing has been experiencing its coldest winter in more than 30 years. It’s been a season of transport chaos, both in the air and on the roads.

Added to that, tens of thousands of the county’s livestock have died during the bitter conditions. To make matters even worse, spring is still struggling to break through.

Wednesday was Chungfen on the traditional Chinese calendar. Chungfen literally means spring or vernal equinox and marks the day that the sun crosses the equator, marking the beginning of spring in the northern hemisphere.

Ironically, it just so happens that Wednesday saw some rare early spring snow falling in Beijing. Warnings were issued as a mixture of snow and freezing rain caused slippery roads across the capital.

There were not too many problems on the roads, but flight operations were affected at the Beijing Capital International Airport leading to the cancellation of over 50 flights with numerous delays.

Further south, the classic combination of cold, dry air meeting relatively warm, moist, tropical air led to ideal conditions for the formation of a tornado in China’s Hunan Province. The tornado struck in the early hours of Wednesday morning and affected over 110,000 people.  Three people died and 52 others were injured.

The storms stretched into neighbouring Guangdong Province. The city of Donguan was hit by a massive hailstorm which killed eight people and injured 136.  Two of the injuries were serious as violent gales and torrential rains swept across the area.

Quieter weather is expected across southern china over the next few days as thundery showers retreat north. These downpours are likely to be prolonged at times and that could lead to some flooding across central areas of the country over the weekend.