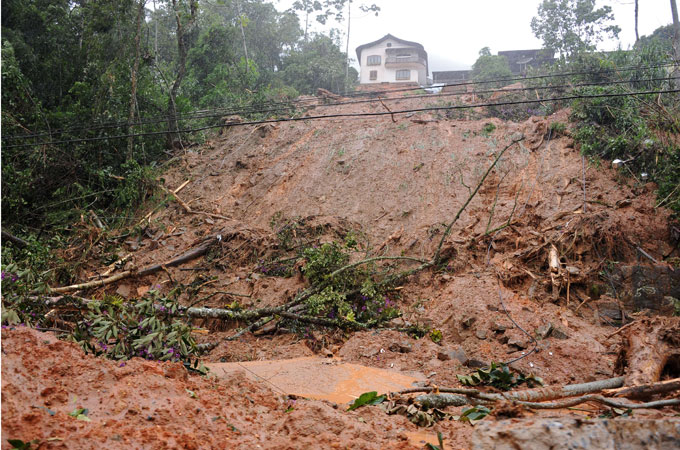 A landslide in Petropolis in the state of Rio de Janeiro. Parts of the historic town centre currently lie under water. [AFP]

The Brazilian state of Rio de Janeiro has been hit by continuous, torrential rainfall which has caused widespread flooding over the last few days. Several rivers have burst their banks and many roads have been cut off by serious mudslides.

The city of Petropolis has been worst affected, located 68km to the north of Rio de Janeiro, the deluge began late on Sunday evening. An incredible 428mm of rain was collected in just 24 hours, causing several rivers to overflow and inducing those devastating mudslides.

The average rainfall here for the entire month of March in this region is 270mm. Hence the flooding and at least 27 people have been killed by landslides, caused by the heavy rains in this mountainous part of the country.

Numerous roads, houses and vehicles have been destroyed and more than 1,500 people have been made homeless. The Brazilian president, Dilma Rousseff was in Rome on Tuesday for the Pope’s inauguration, but he did offer federal help to deal with the impact of the prolonged severe weather.

At least four other Rio state towns have been badly affected by the storms, and Sao Sebastiao in the state of Sao Paulo has also suffered damage. The ground is waterlogged, with the deepest water up to 1.8 metres.

It does look like the worst of the heavy rain has now passed. However showers do still remain in the forecast so it will be some time yet before the region gets a real chance to dry out properly.