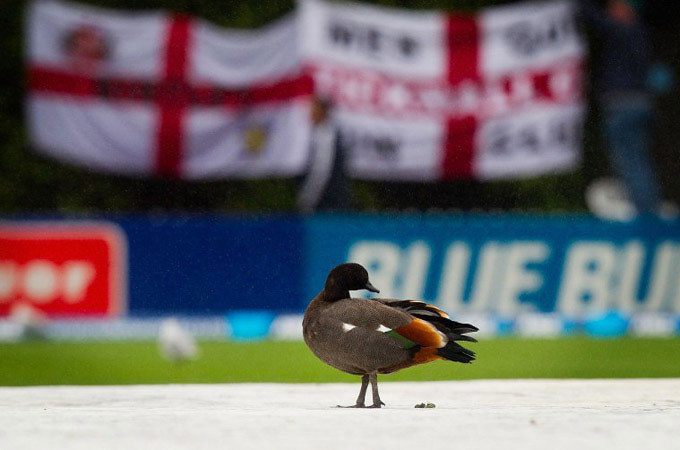 Definitely the weather for ducks, not cricketers. [AFP]

New Zealand’s cricketers will surely have offered a prayer of thanks to the weather gods as the final day of the test match at The Batch in Wellington was rained off on Monday. But for farmers, the change in weather has been too little, too late as drought continues to hold the country in its grip.

Agriculture is an important, albeit declining, contributor to New Zealand’s economic output, contributing around 4% to its gross domestic product.  It is estimated that the drought has already cost the industry US $820 million and that could rise to as much as US $1.6 billion according to some predictions.

Although Sunday’s rain brought up to 100mm to some western parts of the South Island, the North Island is in most need of sustained rainfall.

Two thirds of the country’s cattle are bred here and a drought was declared on Friday, the first time the whole of the island has been affected in more than 30 years. The number of cattle slaughtered because of a lack of available grazing and feed is reported to be up by 40% on the same time last year.

New Zealand is the world’s biggest milk producer and 95% of its dairy production goes for export.  With production down by some 30% in some regions, it is likely that there will be an impact on world dairy prices.

Commenting on the situation, Primary Industries Minister, Nathan Guy said, “It has become clear that nearly all farmers in every part of the North Island are facing very difficult dry conditions.”

“Parts of the South Island are also very dry, in particular the Grey and Buller districts. We are keeping a close watch on all further regions,” he said.