Vote counting has begun in a referendum that is expected to endorse a new constitution that would reduce presidential powers in Zimbabwe and pave the way for an election to decide whether Robert Mugabe extends his three-decade rule.

Turnout, which was slow at first, picked up slightly as Saturday’s vote progressed, said Rita Makarau, chairwoman of the Zimbabwe Electoral Commission.

Both Mugabe’s ZANU-PF and the rival Movement for Democratic Change of Prime Minister Morgan Tsvangirai are backing the charter.

The new constitution would set a maximum two five-year terms for the president, starting with the next election, expected in the second half of this year.

The limit would not apply retroactively, however, so Mugabe could rule for another two terms.

School teacher Petronella Dzikiti said she voted in favour of the new constitution, in part because it would introduce presidential term limits.

“We don’t want a situation like we have today, where some of us knew one leader as a child who remains there when we are grown-ups,” the 36-year-old said outside a polling station in Chitungwiza, near the capital.

The new charter would also beef up parliament’s powers and allows for more democratic reforms that would punish perpetrators of human rights violations.

Biti said the arrest of a senior provincial official for the Movement for Democratic Change party by Mugabe’s loyalist police on Saturday casts doubt on the prospect of free and fair elections slated for around July.

Sampson Magunise, the party official in eastern Zimbabwe, was seized by four armed police before referendum polling stations opened across the country. No reasons for his arrest were given.

“This is illegal and unacceptable but it is typical of the environment we are living in,”‘ Biti said.

Magunise’s arrest followed attacks on four party’s supporters putting up referendum posters in the northern town of Kariba and scuffles between rival youth groups in Harare and the second city of Bulawayo on Friday.

Past elections have been marred by violence and alleged vote rigging blamed mostly on Mugabe’s party.

These ballots, said Al Jazeera’s Haru Mutasa, reporting from Harare, are seen as “a dry run, testing the processes ahead of the presidential election”.

While casting his vote on Saturday, Mugabe urged Zimbabweans to ensure the referendum proceeded peacefully.

“You can’t go about beating people on the streets, that’s not allowed, we want peace in the country, peace, peace,” he said.

Mugabe and Tsvangirai were forced into a power-sharing government as a political crisis followed the disputed 2008 election. At least 180 people were killed in the unrest, and there are widespread fears that this year’s election might bring a return to bloodshed.

Official results of the referendum are expected to be released within five days of the vote. 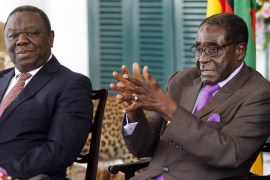 March 16 vote on constitution to set stage for polls, but critics say draft drawn up to suit “personal agendas” of some. 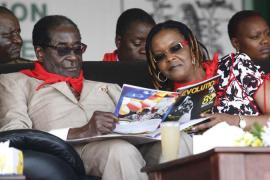 Will Zimbabwe vote with blinkers on?

On the streets of Harare you would not think people are going to vote on a document that will shape Zimbabwe’s future. 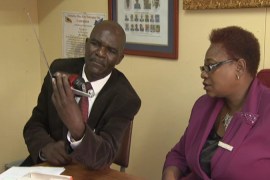 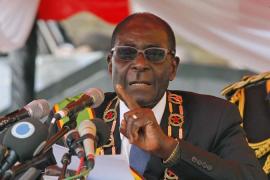 Mugabe – why talk about corruption now?

Mugabe caught everyone off-guard when he admitted that his controversial indigenisation law has glitches.