The frontier, quiet since Israel and Syria agreed on a US-brokered ceasefire in 1974, has turned volatile in recent weeks, after opposition brigades stepped up attacks against army and intelligence compounds dotting the agricultural plain stretching from the border with Jordan to the Damascus outskirts.

The compound near the Yarmouk River in the town of Shagara, eight kilometres from a ceasefire line with Israel, fell after a five-day siege, the sources said on Sunday.

“We have completely taken over this security compound this morning. It’s a command centre for the shabiha (pro-regime militia). They retreated after strong blows dealt to them during a five day siege,” said Abu Iyas al-Haurani, a member of the Yarmouk Martyrs Brigade.

“Anyone who was arrested in the Yarmouk Valley was sent to this military intelligence headquarters to be tortured and it has a strategic importance. With its fall we have completed our liberation of the town of Shagara,” he added.

Another rebel commander said the aim of the attacks in Western Hauran is to open a new front in the fight against President Bashar al-Assad that would stretch troops deployed in Hauran, cradle of the two-year revolt, and to secure a supply route to the western approaches of Damascus.

Fighting has now spread across most of Syria, and amateur videos on Sunday appeared to show ongoing shelling and an almost total destruction of suburbs of Homs and Damascus.

In the northern Aleppo province, rebels have seized several weapons depots in the village of Khan Toman after days of fierce clashes, a military source told AFP news agency.

“Opposition fighters gained control over weapons and ammunition stores in the village of Khan Toman in southern Aleppo province on Saturday after fierce fighting that went on for more than three days,” the source said.

He said the stores contained “a small number of ammunition boxes remaining after the main stock was transferred over a period of more than four months”.

But activists said the opposition had taken control of “huge reserves,” and video posted online showed fighters examining dozens of crates containing weapons and ammunition inside one warehouse.

“These are spoils from Bashar al-Assad,” the person filming the warehouse says, as fighters move from crate to crate, urging the camera to film the weapons.

“Rockets, film these rockets,” they say. “These are 107-mm calibre, made in Iran … These are the rockets that Bashar al-Assad was hitting us with.”

The Syria uprising began in March, 2011, initially as a largely peaceful uprising against Assad.

In response to a brutal regime crackdown, protesters took up arms. The UN estimates that 70,000 Syrians have been killed and that four million of the country’s 22 million people have been displaced. 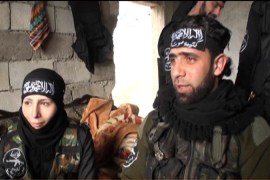 Two years after peaceful protests called for political reform, thousands are dead and millions are displaced. 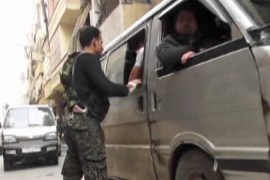 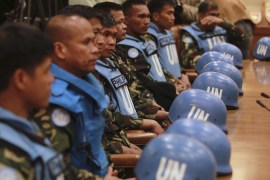 We look at the conflict’s most recent developments where kidnappings and political tactics have dominated the headlines.