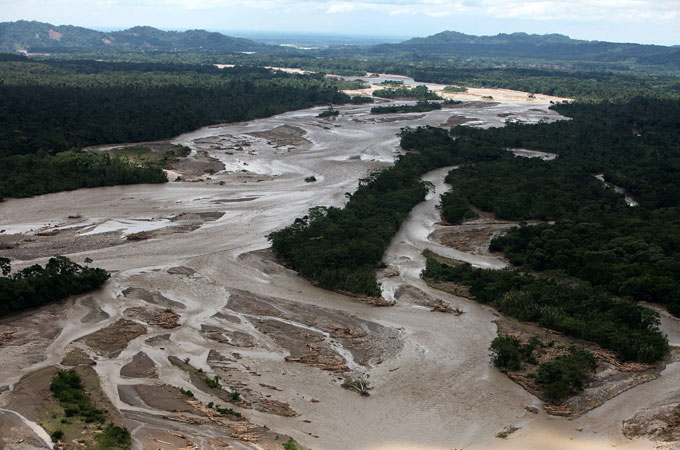 The river Chapare in Chimore, Bolivia when it burst its banks two years ago. Over 9,500 families were affected by the floods. [EPA]

Torrential rains have destroyed thousands of homes and damaged crops across central Bolivia. These heavy rains have plagued the region for much of this week, and rescue workers have launched efforts to evacuate families trapped in remote areas.

Santa Cruz, the country’s second largest metropolitan area, was among the inundated areas, receiving 107mm of rain in the space of 24 hours leading up to midday GMT on Thursday. That equates to the average rainfall for the entire month of March, which is 107.9mm.

More than 4,000 families have been affected by the floods across municipalities in central Bolivia. The overflowing Chimore River is primarily responsible for the damage to homes and residential areas.

Bolivia’s civil defence team has been involved in the rescue efforts, performing fly-by missions to rescue those trapped by the flooding. In addition to the damage to property, the floods have devastated crops across the region including banana, citrus and cocoa production.

The severe weather has been enhanced by a meteorological feature in the region known as a lee low, or more specifically, the Bolivian low. This is an area of low pressure that often develops to the shelter of the Andes.

Explained most simply, a lee low is caused by the stretching of a column of air as it descends on the lee-ward side of high ground such as the Rocky Mountains. The European equivalent is the Genoa low which can form in the shelter of the Alps.

This stretching causes a spin-up of vorticity and this results in the air aloft rising quickly. Rising air will of course cool, condense and form clouds which can ultimately lead to heavy downpours.