Venezuela will hold a presidential election on April 14, the country’s electoral commission has announced.

The council’s announcement on Saturday came a day after Nicolas Maduro, Chavez’s handpicked successor, was sworn in as acting president in a ceremony largely boycotted by the opposition, which slammed it as unconstitutional.

Shortly after the date was set, the main opposition coalition announced it had chosen Henrique Capriles, who lost to Chavez in the October election, as its unity candidate again, this time to face Maduro.

Capriles wrote on Twitter that he was “grateful” for the offer and would announce soon whether he will accept the nomination.

The Miranda state governor was picked by the Democratic Unity Roundtable last year in an unprecedented primary.

Al Jazeera’s Lucia Newman, reporting from Caracas, said Maduro has a political advantage, as he rides on a wave of huge public sentiment following the death of Chavez.

“State television continues to broadcast non-stop the images of Venezuelans coming from all over the country, filing past the casket of Hugo Chavez, and wiping their tears away,” she said.

“These images are still fresh in the minds of Venezuelans.”

The electoral commission announced that the campaigning period will be begin on April 2 and ending on April 11.

“The period is extremely short. It will probably be the most intense political campaign in the history of Venezuela,” Newman said.

Political hostilities had already begun just hours after Venezuela and more than 30 foreign leaders gave Chavez a rousing state funeral, with Maduro railing against the opposition and capitalism following his inauguration.

Capriles, meanwhile, denounced the inauguration of Maduro as a “constitutional fraud” and abuse of power by the government.

“Nicolas, nobody elected you president. The people didn’t vote for you, kid,” Capriles said.

He argued that the caretaker president cannot run for office under the constitution.

Chavez, 58, died on Tuesday after a two-year battle with cancer, ending his 14-year rule over the country.

In last year’s presidential elections, Chavez beat Capriles by 11 points. But the 40-year-old governor gave the opposition its best result ever against the late president, garnering 44 percent, or 6.5 million, of ballots.

A recent survey by pollsters Hinterlaces gave Maduro a 14-point advantage over Capriles, though the opposition leader has questioned the firm’s reliability in the past.

“The next president will have huge challenges: Earning the respect of the impoverished population, who blindly believe in Chavez, in a divided country,” professor Agustin Blanco of the Central University of Venezuela said.

Venezuela has given Chavez an extended farewell, with hundreds of thousands of people swarming the streets of Caracas on Wednesday, cheering and crying as his coffin was slowly taken to a military academy.

Chavez has been lying in state at the academy since then and throngs have filed past his half-open casket nonstop.

The government plans to embalm and preserve Chavez “like Lenin” to rest in a glass casket “for eternity”, a move decried by some Venezuelans, who claimed that it went against the president’s wish to be buried. 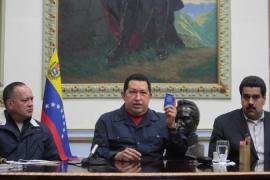 Are these men Venezuela’s next leaders? 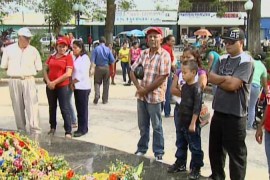 Many Sabaneta residents disappointed that late Venezuelan leader will not be buried in the small town. 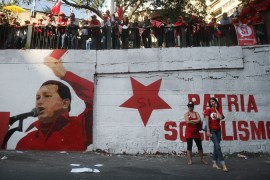 It’s unclear whether the death of populist President Hugo Chavez will calm or accentuate social divisions. 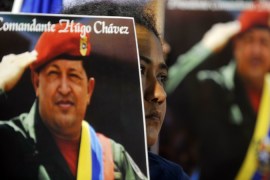 What does the future hold for the Bolivarian revolution?