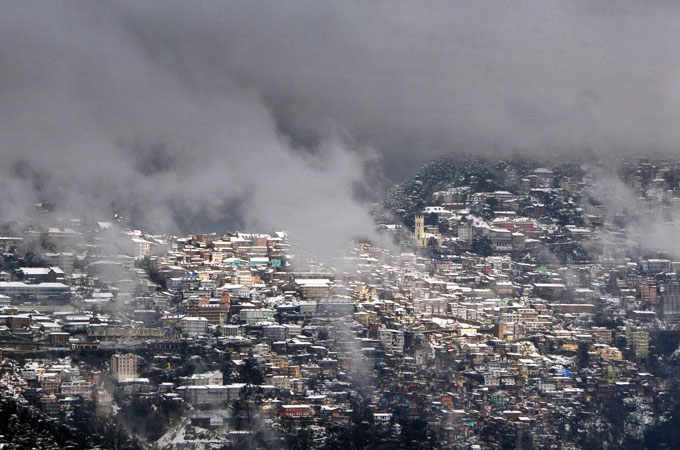 Snow-covered buildings in the town of Shimla, the capital of India’s northern Himachal Pradesh state [AFP]

Severe weather has affected northern parts of India and Pakistan.

In Pakistan days of torrential rain have triggered flash floods, which have led to the death of at least 29 people. Most of the causalities occurred when people’s homes collapsed on them.

The worst hit region has been the northwest, on the border with Afghanistan, but elsewhere the rain has also been exceptionally heavy.

Islamabad reported 191mm of rain in three days. This is nearly three times the amount you’d expect in the entire month of February.

In the north Indian hill state of Himachal Pradesh, the snow has blocked roads and damaged power lines. Many vehicles have been abandoned as residents and tourists have been struggling to get on with their everyday lives.

After two days of heavy snow and blizzard conditions, dozens of cars were buried in the snow, stranding drivers in the process. Many mountain roads have been left crowded by stranded cars and lorries.

Inbound tourists had to wait for hours for the roads to be cleared and locals complained about the ineffectiveness of the authorities. The weather has deprived them of essential amenities.

Access to electricity remains erratic at best. The electricity department has confirmed that some poles have fallen down and that power cuts could last at least another two to three days.

Despite the inhospitable conditions and more heavy snow, work at restoring power is now underway. At least 35-40 poles have been damaged over the last few days.

There have also been some avalanches across the region. Kinnaur district has been particularly badly hit. At least five people are thought to have killed, prompting the provincial government to rush in aid and other relief materials.

Some districts over the higher reaches of Himachal Pradesh have seen as much as 90cm of snow recently. Snow here often provides a welcome boost to tourism and the hospitality sector, but this has been disruptive.

Fortunately the weather system has now cleared and no more significant rain or snow is expected in the coming days.