A Bangladesh war-crimes tribunal has sentenced a senior leader of the country’s biggest Islamist party to life in prison, the second verdict in trials that have reopened wounds about the country’s independence war and sparked riots.

Abdul Qader Mollah, 64, was found guilty on Tuesday of charges including murder, rape, torture and arson during Bangladesh’s war to break away from Pakistan in 1971.

Activists of Mollah’s Jamaat-e-Islami party clashed with police in the capital, Dhaka, and other towns soon after the verdict.

One man was killed and dozens others injured when police opened fire at dozens of Jamaat supporters in Chittagong city, 216km southeast of Dhaka, Shafiqul Islam, local police official, said.

He said police fired after rock throwing protesters attacked them.

The war-crimes tribunal delivered its first verdict last month, sentencing a former member of Jamaat-e-Islami and popular Islamic preacher to death, and a state prosecutor said he had been expecting the same sentence on Tuesday.

“We are not happy with the verdict and the merit of the judgement is not clear to us,” Mohammad Ali, the prosecutor, said.

“We wanted his death and are surprised by the lesser punishment handed out by the tribunal.”

Qader Mollah made a “V” for victory sign while getting into a car after the ruling.

“It is a state-managed judgement,” Khan said in a statement. “The tribunal pronounced the verdict as per the instruction of the government.”

Jamaat is demanding that the government dissolve the tribunal and release all of its leaders facing trial, including the party’s former and current chiefs and their top lieutenants.

Bangladesh became part of Pakistan at the end of British rule in 1947 but it broke away in 1971 after a war between Bangladeshi nationalists, who were backed by India, and Pakistani forces.

Some factions in Bangladesh opposed the break with Pakistan and numerous abuses were committed during the nine-month war.

Jamaat has been accused of opposing the independence war and helping the Pakistani army during the war in what was then East Pakistan. Jamaat denies that.

It has threatened to paralyse the country in protest against the war-crimes tribunal that it says is politically biased.

Shops and businesses were shut and the streets were mostly empty in the capital and elsewhere as the Jamaat-e-Islami enforced a national strike against the verdict.

The party called for the strike to extend into Wednesday.

Hundreds of war veterans massed outside the Dhaka court on Tuesday as the verdict was delivered, demanding that Mollah be put to death.

There was tight security around the court premises, prompted by fears of a possible attack by Muslim activists.

Another 10 people, including two from main opposition Bangladesh Nationalist Party (BNP), are awaiting trial by the tribunal.

Sheikh Hasina Wajed, the Bangladeshi prime minister, set up the tribunal in 2010 to investigate abuses during the 1971 conflict that claimed about three million lives and during which thousands of women were raped.

But critics say she is using the tribunal against members of the two biggest opposition parties, the BNP and the Jamaat-e-Islami.

Begum Khaleda Zia, Hasina’s arch rival and leader of the BNP, has called the tribunal a “farce”.

The ruling Awami League party has rejected accusations that the tribunal is biased but it has been criticised by human rights groups for failing to adhere to standards of international law.

Awami League leaders said on Tuesday they were also displeased over the tribunal’s verdict.

“It did not reflect people’s expectations,” Qamrul Islam, state minister for law, said. 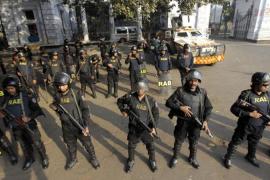 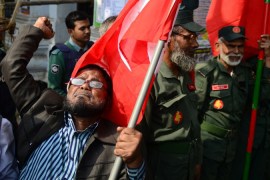 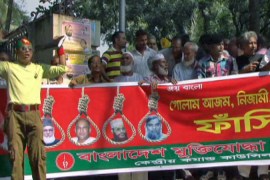 Women allegedly raped in the 1971 war of independence face an uphill battle as critics say trial is flawed. 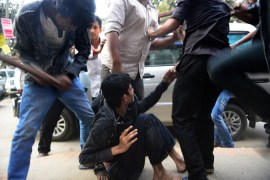