President Francois Hollande has received a rapturous welcome in Mali as he promised that France would stay as long as necessary to continue the fight against rebels in the country’s north.

As troops worked to secure Kidal, the last bastion of the al-Qaeda-linked rebel fighters who occupied the vast desert north before the French intervention, Hollande told Malians it was time for Africans to take the lead but that France would not abandon them.

After stopping in Timbuktu, Hollande visited the capital, Bamako, where he held formal talks with his Malian counterpart Dioncounda Traore on the eventual hand-over of the French operation to a UN-backed African force.

In a press conference addressing the Malian people with President Traore, Hollande said “terrorism has been repelled but not wiped out”.

“I’m saying to you the fight has not yet ended, terrorist groups are weakened, they have suffered heavy losses, but have not disappeared. France will remain with you as long as it is necessary.”

Hollande also said the Malian people are in charge of their own future as the he called for political transition and elections in July.

“We need France and Mali to be united together… to show that terrorism can be conquered, democracy can prevail and the rights of man are valid everywhere,” Hollande said.

The Malian president called Hollande a “brother to all the Malian people” and a “true friend of the whole of Africa”.

Traore also called on the Malian people to reject extremism and to not seek vengeance, saying the “army and dignity of the nation is at stake”.

He called for national reconciliation between the forces of the north and south, calling it a “historic duty”.

Hollande, accompanied by his ministers for defence, foreign affairs and development, was on a one-day trip to the Sahel nation to support French troops who in three weeks have ousted fighters allied with al-Qaeda from Mali’s main northern towns.

The French president said that his country’s operation, which has 3,500 soldiers on Malian soil backed by warplanes, helicopters and armoured vehicles, aims to make way eventually for a UN-backed African force of around 8,000 troops, which is still being deployed.

Hollande’s visit to Mali comes as the French-led military intervention in the country to recapture towns from rebels was swiftly coming to a close.

Al Jazeera’s Jacky Rowland, reporting from the airport in Timbuktu, said the final stage of the military intervention was yet to be completed.

“But the final stage of that mission, as outlined by Hollande, to restore the whole of the country as a unified nation under central government control, is still some way off.”

Malian troops have come under criticism for alleged summary executions and other rights abuses against light-skinned citizens seen locally as supporters of the rebels.

Malian troops have denied the allegations.

Human Rights Watch said in a report corroborated by other rights groups that Malian troops had shot at least 13 suspected rebel supporters in Sevare and dumped them into wells.

“Neither the Malians nor the French took the required precautions to avoid hitting civilian targets,” Gaetan Mootoo, Amnesty’s lead researcher for West Africa, told a news conference in Bamako.

France has denied responsibility for these attacks, saying they took place before its intervention began.

Many Tuaregs and Arabs had already fled fearing further attacks.

Rebel groups have also come under criticism for rights abuses with HRW and Amnesty saying that children had been recruited as soldiers. 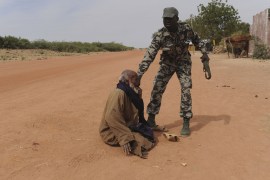 As al-Qaeda-linked rebels withdraw, reprisal attacks and human rights abuses are reported in the north. 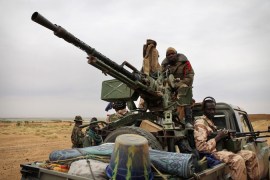