The UN has formally rejected claims for damages over a cholera epidemic in Haiti that has been widely blamed on UN peacekeepers.

About 8,000 people died in the epidemic but Martin Nesirky, UN spokesman, said on Thursday that the global body had told lawyers the damages claim was “non-receivable” under a 1946 convention laying out the UN’s immunities for its actions.

In November 2011, the Boston-based Institute for Justice and Democracy in Haiti filed a petition at UN headquarters in New York seeking a minimum of $100,000 for the families or next-of-kin of each person killed by cholera and at least
$50,000 for each victim who suffered illness or injury from cholera.

Ban Ki-moon, UN secretary-general, telephoned Haiti’s President Michel Martelly “to inform him of the decision and to reiterate the commitment of the United Nations to the elimination of cholera in Haiti”, Nesirky said.

Certain health experts have said the cholera epidemic, which erupted in late 2010, was introduced to Haiti by Nepalese peacekeepers. The UN has never acknowledged responsibility, insisting it was impossible to pinpoint blame definitively.

Lawyers for the families of some of the dead and the 635,000 people estimated to have been made sick by the cholera had predicted a damages award could cost the UN more than $1bn.

“The secretary-general again expresses his profound sympathy for the terrible suffering caused by the cholera epidemic, and calls on all partners in Haiti and the international community to work together to ensure better health and a better future for the people of Haiti,” Nesirky said.

In a separate development on Thursday, former Haitian leader Jean-Claude “Baby Doc” Duvalier defied a judge’s order and refused to attend a hearing to determine whether he will again face charges for human-rights abuses committed during the nearly 15 years of his regime.

Reynold Georges, Duvalier defence lawyer, showed up 90 minutes after the hearing was about to start and announced that he had filed an appeal of the judge’s order.

The session then began in a courtroom crowded with reporters and observers.

Georges said he was confident that the Supreme Court would not only overturn the order to compel Duvalier’s presence in court but also block the effort by victims of the Duvalier government from getting the court to reinstate the charges.

Duvalier ruled Haiti from 1971-1986, a time when thousands were imprisoned, tortured and killed for opposing the government. He was ousted in a popular revolt and forced into exile in France.

He made a surprise return to Haiti in January 2011 and was promptly charged with embezzlement and human-rights abuses. A court threw out all but the embezzlement charge, which carries a maximum of five years in prison.

Duvalier, who lives in a villa in the hills above the Haitian capital, missed two previous court hearings without penalty. 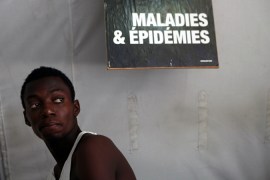 We ask what the new plan to eradicate cholera truly means when the UN still refuses to admit causing the outbreak.