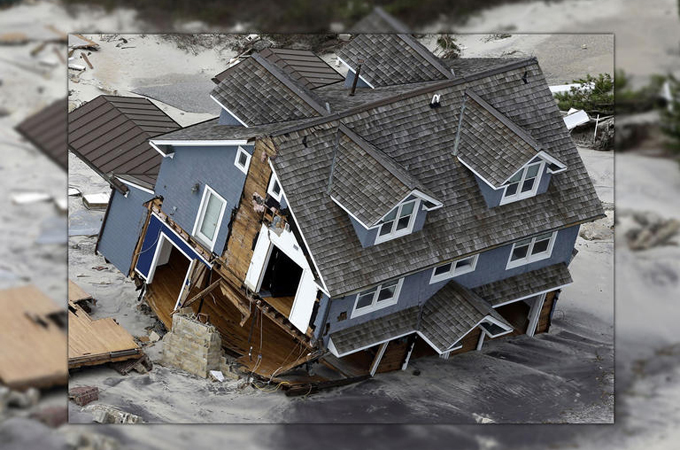 A flooded home along the New Jersey shoreline [AP]

The US National Hurricane Center (NHC) has released its assessment on Hurricane Sandy which produced a swathe of destruction from the Caribbean to the northeast of the US in late October.

Sandy began life as a tropical wave off the west coast of Africa on the 11th October, but it made itself noticed when it became a hurricane, just south of Jamaica on 24th October.

Despite strengthening into a category 3 hurricane over eastern Cuba, Sandy weakened again over the Bahamas.

The combination of events which followed made Sandy different from any other. It began to regain its strength whilst at the same time exhibiting classic frontal characteristics.

Any hope that Sandy would turn right into the North Atlantic were dashed by the presence of a blocking area of high pressure to the north.

An approaching trough of low pressure from the west and the exceptionally warm waters of the Gulf Stream contributed to Sandy’s development.

It was only when Sandy moved northwards over cooler waters and into the colder air over the eastern US that it became an extra-tropical system. Landfall was eventually made on 29th October at 2330 GMT just to the northeast of Atlantic City, New Jersey.

Here are some facts about Sandy:

The NHC point out that the forecast of Sandy’s track, intensity and storm surge were all excellent. However, the organization has been criticized for only issuing strong wind warnings in advance of Sandy, rather than hurricane warnings.

The NHC felt that to do so would have misrepresented the status of Sandy but acknowledged that changes to the system need to be made.

It has been proposed that hurricane warnings definition be widened to include post-tropical systems. The word ‘hurricane’ in the warnings keeps people attention and could bring about a greater awareness of impending bad weather.