Live images from a telescope at the Gingin Observatory in western Australia showed the asteroid looking like a white streak, moving across against a backdrop of black sky on Friday.

Astronomers said the object’s speed and proximity made it a challenge to track, because telescopes had to be aimedprecisely or risked missing it.

The US space agency had said in a statement on its website that this was “the closest-ever predicted approach to Earth for an object this large.”

The asteroid isn’t nearly as large as the 10km-wide object that took out the dinosaurs, but astronomers said it was large enough that, had it struck the Earth’s surface, it could wipe out a large urban area.

However, the asteroid’s path kept it well away from Earth and from the ring of communications satellites in Earth’s orbit, and NASA said the object’s orbit would keep it further from the planet in the foreseeable future.

NASA said the flyby provided a “unique opportunity for researchers to study a near-Earth object up close.”

Among other projects, the Goldstone Solar System Radar, located in California’s Mojave Desert, was taking radar images of the asteroid on Friday and over the coming days to determine its exact size and shape.

The 2012 DA 14 was discovered by chance by astronomers after passing nearby last February.

NASA estimates a smallish asteroid such as 2012 DA 14 flies close to Earth every 40 years on average, but only hits our planet once every 1,200 years.

Astronomers have detected some 9,500 celestial bodies of various sizes that pass near Earth, but they estimate that’s only one tenth of what’s out there.

Even 2012 DA 14 was almost missed last year because of how quickly it passed through the observable sky, according to Jaime Nomen, one of the astronomers who spotted it from the La Sagra observatory in southern Spain.

Earlier Friday, an unrelated meteor exploded with a blinding flash above central Russia, setting off a shockwave that shattered windows and hurt almost 1,000 people in an event unprecedented in modern times.

The meteor was estimated to be several meters long and to weigh several dozen tonnes. 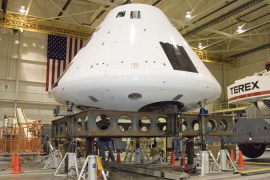 Could Obama’s election win save the world from asteroid doom?

A meteor impacting Earth is not a matter of ‘if’, but ‘when’ – and Obama’s vision for NASA is critical. 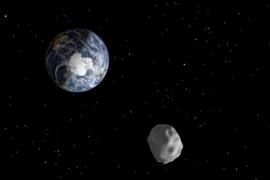 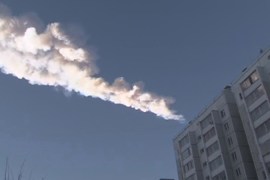