A teenager has been killed during a protest in Bahrain marking the second anniversary of the country’s pro-democracy rallies, activists have said.

Hussain al-Jaziri, 16, was reportedly killed by shotgun fire during a protest in Al-Daih, a village west of the capital Manama. Witnesses said that he was shot at close range.

On Friday, Bahrain’s interior ministry said that a police officer had died after being hit by an incendiary device thrown during clashes with protesters a day earlier.

Earlier, the ministry had confirmed on Twitter that a person had died, but offered no further details.

“[The] operations room received [a] call from SMC reporting an injured individual pronounced dead. Public prosecutor was informed,” the tweet said, referring to Salmaniya Medical Complex, the largest hospital in Bahrain. It was unclear if the statement referred to the police officer or the teenager.

The ministry also said that “rioters” had blocked roads.

Hundreds of people had protested on Thursday in villages across the country, and there were reports of tear gas being used in several locations. Three Bahraini photojournalists were arrested while working in Daih, according to one of them, Mazen Mahdi, who tweeted about his arrest. 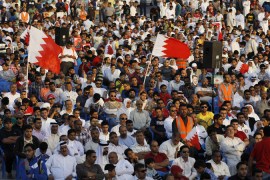