Syrian rebels have shot down two military warplanes over the northwestern province of Idlib, a monitoring group has said.

Both jets were hit with fire from heavy machineguns while the air force was carrying out a series of raids in the area, much of which is under the control of the rebels, the Syrian Observatory for Human Rights said on Thursday.

The opposition fighters trying to oust President Bashar al-Assad also captured the town of Shadadah, near the Jbeysa oil field in hotly contested Hasaka province, according to Rami Abdul-Rahman, head of the Britain-based activist group.

The oil field is in an energy-rich area along Syria’s border with Iraq.

Abdul-Rahman said the rebels captured about 70 percent of the oil field but there was still sporadic gunfire in the area.

Meanwhile, Iranian authorities said on Thursday that gunmen had shot dead an Iranian Revolutionary Guards chief in an ambush on the way from Damascus towards the Lebanese capital.

Iran’s elite fighting force named him as commander Hassan Shateri, in a statement on its website that said he was killed on Tuesday.

Opposition fighters were also battling regime forces for the third straight day for control of the main airport in the northern city of Aleppo.

On Wednesday, the rebels knocked down army defences and closed in on the country’s second largest airport in Aleppo, Syria’s main commercial hub.

The airport stopped all flights weeks ago because of the fighting.

Earlier this week, rebels captured the nation’s largest dam and a military base near the northern commercial city.

They have also brought the fight closer to the heart of Damascus, seat of Assad’s regime.

Regime forces have carried out airstrikes on rebel positions and shelled opposition strongholds with artillery in efforts to counter recent rebel advances in the northeast and around the capital.

The foray in Damascus marks the opposition’s second significant attempt to capture the capital since July, when rebels took control of several neighbourhoods before being swept out by a swift government counteroffensive.

Opposition fighters have been attacking the airfield for weeks, and took over most of the “Brigade 80” military base protecting it on Wednesday.

Abdul-Rahman said fierce clashes were also taking place around the airport, which remained in regime hands on Thursday.

He said there were also reports of heavy fighting at another nearby military air base called Nairab.

The United Nations says more than 60,000 people have been killed in 23 months of fighting in Syria.

The conflict started as peaceful protests against Assad’s rule in March 2011 and turned into civil war after some opposition supporters took up arms to fight a brutal government crackdown on dissent. 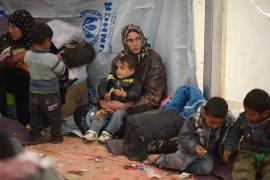