A Mexican Senate committee has debated an energy bill that would open up the world’s 10th-biggest oil producer to private investment by allowing new types of contracts, marking the industry’s most sweeping overhaul in 75 years.

The bill, announced by centrist ruling party and opposition conservative politicians on Saturday, would let private firms
partner with Pemex, the state oil firm, via profit-sharing, risk-sharing and service contracts as well as licences in a bid to boost production.

The decision, which would keep ownership of crude in state hands, is at the centre of an economic reform drive that President Enrique Pena Nieto hopes will boost lagging growth in the second economic power in Latin America.

It is much bolder than a draft proposed by Pena Nieto’s Institutional Revolutionary Party (PRI) in August, which would have offered profit-sharing contracts and was considered too tame for attracting private firms.

Senate committee members debated the bill on Sunday, but did not wrap up speeches in time for a vote. They will resume their session on Monday.

Once they sign off on the bill, it heads separately to the full Senate and lower chamber for votes.

Pena Nieto hopes to pass the reform before Christmas but lacks a majority in Congress.

He needs the support of conservatives to push the bill through after the leftist Party of the Democratic Revolution (PRD), which opposes opening the oil sector, pulled out of talks.

“Today we have bet that we can imagine a Pemex that can go out and compete in the world,” David Penchyna, PRI Senator who heads the energy committee, said.

Saturday’s proposal would allow private investors to drill for and market the country’s oil.

The reform, however, stops short of full-blown concessions that oil majors had been hoping for and does not allow companies to book reserves.

It does let them report projected income from agreed contracts for accounting purposes.

The draft marks a major break with tradition in Mexico, where assets of foreign oil companies were expropriated in 1938 to create Pemex, which is a symbol of national pride.

Outside the Senate, hundreds of protesters beat rocks and spoons against barricades covered with graffiti criticising the energy reform, as riot police looked on. 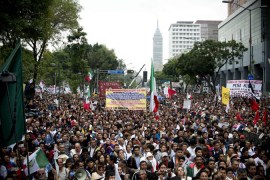 More than 40,000 people march in Mexico City to reject plans to overhaul tax system and privatisation of energy sector. 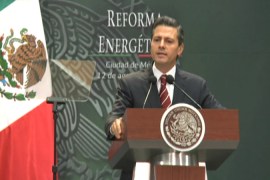 Mexico to open up oil to foreigners 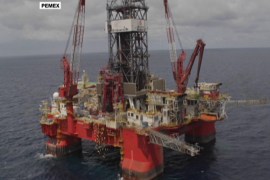 President’s proposal to open up industry to foreign investment to boost production meets opposition in congress.