Other details of the trip and the US delegation will be announced soon, the White House said on Saturday.

Obama and his wife, Michelle, will be joined at the service on Tuesday by former President George W Bush and his wife, Laura, who will fly on Air Force One to South Africa next week, the White House said on Friday.

With ceremonies only days away, however, officials acknowledged on Saturday that they could not offer any specifics yet.

Across the country, South Africans already have begun honouring Mandela, who died on Thursday aged 95.

Officials expect tens of thousands to participate in next week’s official services for the man who became South Africa’s first black and democratically-elected president after being jailed for 27 years by the cruel white minority regime which he opposed.

In their first statement since Mandela’s death, his family said they had “lost a great man”, just as they had when South Africa’s apartheid government imprisoned him.

“The pillar of our family is gone, just as he was away during that 27 painful years of imprisonment, but in our hearts and souls he will always be with us,” said the statement, read by family spokesman Lieutenant General Themba Templeton Matanzima.

“His spirit endures. As a family we commit ourselves to uphold and be guided by the values he lived for and was prepared to die for,” he said.

Official services honouring Mandela begin on Tuesday with a major memorial planned at FNB Stadium on the edge of Johannesburg’s Soweto township, noted for its place in the struggle against apartheid.

Government Minister Collins Chabane told journalists on Saturday he expected massive crowds far beyond what the stadium’s normal 95,000-person capacity could hold. He said there would be “overflow” areas set up.

“We can’t tell people not to come,” he said.

He could not offer specifics about how crowds would arrive there with all roads to the venue closed by police or who would serve as a master ofceremonies.

Those planning Mandela’s funeral include the former president’s family, the federal government, the military and the African National Congress political party.

Despite some prior planning by authorities as Mandela grew frail and suffered bouts of hospitalisation in recent years, many of the details remain up in the air.

It is unclear which ceremony world leaders will attend, either Tuesday’s stadium memorial or the planned funeral service December 15 in Qunu, the Nobel Peace Prize laureate’s rural hometown in Eastern Cape Province.

Chabane said South African officials briefed diplomats on Saturday about the arrangements, though they would leave it to foreign governments to say which event their leaders would attend.

Mandela’s body will not be at the stadium event on Tuesday, Chabane said. His body would rest in state on Wednesday, Thursday and Friday at the Union Buildings in Pretoria, the seat of government power in South Africa’s capital.

Mourners will walk up the steps into the Union Buildings’ amphitheater and file past Mandela’s body, Chabane said. Authorities blocked visitors from visiting the amphitheater Saturday. Chabane said he didn’t know yet whether it would be an open- or closed-casket viewing.

ANC members will hold a ceremony on December 14 at Waterkloof Air Force Base near Pretoria before Mandela’s body is flown to Qunu from there, Chabane said.

Sunday has been declared a national day of prayer and reflection over Mandela’s death. On Monday, South Africa’s two houses of parliament will hold special sessions to pay tribute to Mandela. 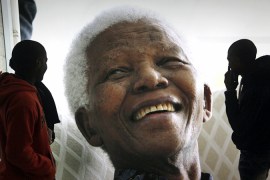 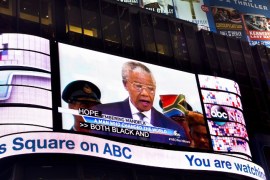 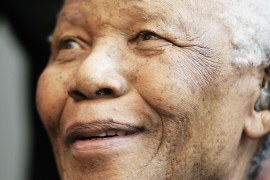