The UN Security Council has authorised increased military action by France and African troops in the Central African Republican to try to end unrest.

The council’s unanimous approval of a French-sponsored resolution on Thursday came amid reports that at least 100 people have died in Bangui, the capital of the former French colony, in the heaviest clashes in the city in months, according to Al Jazeera’s correspondent.

The Central African Republic has been rocked by Muslim-Christian violence after an alliance of Muslim rebels, originally from neighbouring Chad and Sudan, ousted former president Francois Bozize in March.

The predominantly Christian country has since suffered a wave of killings, torture and rapes that human rights groups blame on rival armed groups. The fighting is mainly between Seleka, who are predominantly Muslim, and the Christian Balaka.

Thursday’s resolution authorises the deployment of an African Union-led force for a year with a mandate to use “appropriate measures” to protect civilians and restore security and public order.

The AU force, known as the International Support Mission in the Central African Republic (MISCA), is expected to increase its troop strength from about 2,500 to 3,500.

In Paris, President Francois Hollande told reporters after the resolution was passed: “I have decided to act immediately, in other words, this evening.”

He added that the number of French troops present in the poor landlocked nation, currently 600, would be doubled as early as this evening thanks to reinforcements from neighbouring states.

The resolution also authorises French forces, for a temporary period, “to take all necessary measures” to support MISCA.

Al Jazeera’s James Bays, reporting from the UN headquarters in New York, said: “It’s not clear when more troops will arrive. Some of the African peacekeepers are already there; a small number of French troops are already there but many more need to make up that number of 1,200.”

France promised last week to send 1,000 troops to the Central African Republic following a warning from French Foreign Minister Laurent Fabius that the CAR “is on the verge of genocide”.

The Defence Ministry has said about 600 troops are in the country.

France’s UN ambassador, Gerard Araud, told the council after the vote that “people have been terrorized by militia carrying out atrocities” and warned that the country “is likely to fall apart in mass atrocities”.

“History demands us to avoid the worst,” he said, welcoming the robust mandate for the African and French troops.

Doctors Without Borders said it had sent a medical and surgical team to a hospital in Bangui after heavy weapons fire and automatic gunfire in the city.

Blasts of heavy and small arms gunfire could be heard in Bangui, Al Jazeera’s Nazanine Moshiri said, reporting from the capital.

She said the city had been “practically deserted” and that a “number of Christians had taken refuge in a church”.

“We are hearing reports of dead bodies in mosques. This conflict has taken a sectarian twist in the past few months,” she said, referring to clashes between the Balaka (anti-machetes) fighters who are Christians and Muslim fighters who belong to the Seleka rebel army.

Thursday’s fighting was reported to be the worst since Seleka, which claims control of Bangui, took over the city in March.

Michel Djotodia, the leader of Seleka and de facto president of CAR, has struggled to control his loose band of fighters since the rebel alliance Seleka broke up.

The CAR has remained poor and unstable despite being rich in gold, diamonds and uranium. Decades of spillover from conflicts in its larger neighbours have kept it mired in crisis. 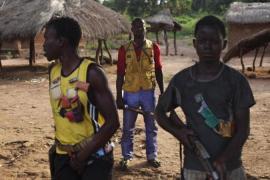 The best option to settle the CAR crisis?

The deteriorating situation in the CAR undermines the African Union’s collective security system.