Egyptian authorities have arrested 23 Muslim Brotherhood supporters on accusations of belonging to a terrorist organisation, a day after the country’s interim government blacklisted the group.

The people arrested on Thursday were accused of passing out leaflets in support of the Brotherhood, promoting the group’s ideology, and inciting violence against the Egyptian security services, according to Egypt’s state media agency, MENA.

Later on Thursday, one person was killed as student supporters of the Brotherhood clashed with residents of a Cairo district where they were protesting.

“Egypt will stand firmly in confronting terrorism and the people will never be afraid as long as the army is present,” said Egyptian army chief General Abdel Fattah el-Sisi, during an army graduation ceremony on Thursday in Cairo.

The arrests come only a day after Egypt’s interim government declared the Muslim Brotherhood, to which deposed former President Mohamed Morsi belongs, a terrorist group.

The designation means anyone accused of taking part in pro-Muslim Brotherhood rallies, possession of the group’s literature, or supporting the group “verbally or in writing” could be sentenced to five years in prison, the Interior Ministry said.

US Secretary of State John Kerry expressed concern on Thursday over Egypt’s intensified pursuit of the Muslim Brotherhood in a phone call with his counterpart in Cairo Nabil Fahmy.

The arrests on Thursday also come after two bombings rocked Egypt earlier in the week.

On Tuesday, a blast at a police station in the Nile Delta city of Mansoura killed 14 people and wounded many others, while another bomb exploded near a bus in Cairo on Thursday, wounding five. 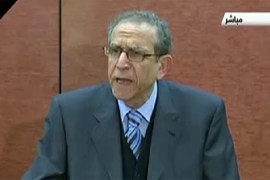 Move comes a day after rioters target Muslim Brotherhood business in the city of Mansoura. 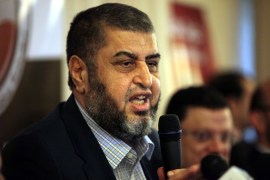 Senior Muslim Brotherhood figures are among the prisoners on hunger strike. 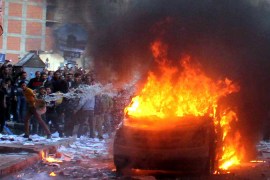