A Thai police officer has been killed and scores of people wounded in clashes between security forces and opposition protesters in the capital, Bangkok, as the government rejected a call from the election commission to postpone February polls.

At least 119 people were injured on Thursday during running battles between anti-government protesters, calling for the government to resign and postpone the polls, and the police, according to the emergency services.

It comes as Thailand’s election commission called for upcoming polls to be delayed.

“He was shot in his chest and brought to hospital by helicopter,” Jongjet Aoajenpong, director of the Police General Hospital, said of the slain police officer.

“A team of doctors tried to resuscitate him for more than half an hour.”

Violence broke out as demonstrators tried to force their way into a sports stadium in the Thai capital, where representatives of about 30 political parties were gathered to register for parliamentary elections.

Scores of demonstrators, some armed with sling shots, threw rocks and attempted to break through police lines prompting the police to use rubber bullets, tear gas and water cannons.

Inside the stadium the lot-drawing process was apparently unaffected by the unrest outside the gates.

However, some election officials later left the stadium by helicopter to avoid the unrest and because protesters were blocking the exits.

The election commission said in a statement that it was urging the government to consider “postponing the elections”, citing the security situation.

“We cannot organise free and fair elections under the constitution in the current circumstances,” commission member Prawit Rattanapien said at a news conference.

Government officials later rejected the call to postpone the polls.

“The February 2 election will go ahead,” said Deputy Prime Minister Pongthep Thepkanchana in a televised address. “There is no law allowing the government to delay the election.”

The clashes are the first violent incident in almost two weeks of daily demonstrations on the streets of Bangkok and the worst civil disturbance since 2010, when more than 90 civilians were killed in a crackdown on anti-government protests.

This latest unrest, which has drawn tens of thousands of protesters onto the streets, has left five people dead and more than 200 wounded.

“Protesters are not peaceful and unarmed as they claimed,” Deputy Prime Minister Surapong Tovichakchaikul said in a televised address on Thursday.

“They are intimidating officials and trespassing in government buildings.”

Protesters want Prime Minister Yingluck Shinawatra to step down and they oppose the elections, due to take place on February 2, because she is seen as sure to win them.

Her brother is the former Prime Minister Thaksin Shinawatra, who was ousted in a military coup in 2006 and lives in self-imposed exile to avoid imprisonment on corruption charges.

He or his allies have won every election for the last 12 years.

In mid-October Yingluck tried to introduce an amnesty law that would have allowed Thaksin to return as a free man, a move that sparked the latest round of protests.

On Wednesday, protesters rejected a compromise from Yingluck, who announced a proposal for a national reform council. They are planning more civil disobedience and street protests to force her to resign as caretaker prime minister.

Police have not tried to arrest the ringleader, Suthep Thaugsuban, who is demanding the country be led by an unelected council until reforms can be implemented.

Protesters were on the way to the Yingluck’s residence to continue their demonstration, where about 500 police officers have been stationed. 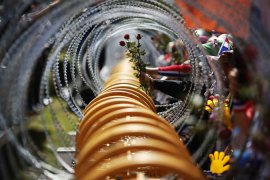 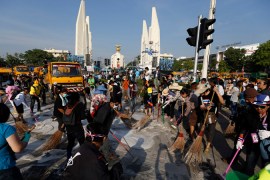