About 100,000 people rallied in Ukraine’s capital to demand the ouster of the president and his Cabinet as mass anti-government protests entered their second month.

Sunday’s rally was the latest in a series of rallies sparked by President Viktor Yanukovych’s decision last month to choose ties with Russia over integration with the 28-nation European Union.

“We will create such a hell for the authorities that the ground will burn under their feet,” said Oleh Tyahnybok, head of the opposition nationalist party Svoboda.

“Now we see that Ukraine is in difficult straits,” Putin told his annual news conference after his meeting with Yanukovich.

“If we really say that they are a brotherly nation and people then we must act like close relatives and help this nation.

While Sunday’s demonstration was smaller than on previous weekends, it was still a strong showing for a protest movement that has entered its second month in the frigid cold.

Kiev’s main square, the Maidan, and an adjacent street were filled with protest tents, field kitchens and giant barricades made of sacks of snow, car tires and wooden planks.

“The Maidan has become a symbol of Ukraine’s change,” said Mykola Razdel, 35. “Simple people want change and it is in our power to change everything.” 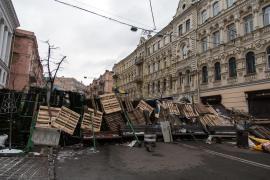 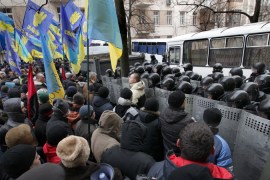 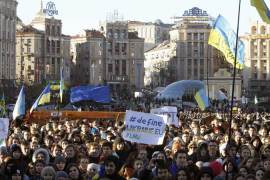 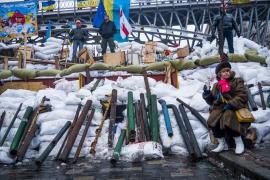