India has demanded an apology from the United States after the “terrible” treatment of one of its top diplomats, who was arrested and strip-searched, as tensions persist between Washington and New Delhi.

Indian Foreign Minister Salman Khurshid said on Thursday that he hoped India’s “valuable relationship” with the US would soon return to normal, but reiterated calls for the visa fraud case against diplomat Devyani Khobragade to be withdrawn.

“We have asked for the case to be dropped and withdrawn… we are not convinced that there are legitimate grounds for pursuing it,” Khurshid told foreign journalists.

“I cannot believe if a US senator was arrested he would be put through this behaviour….I would rather not prejudge. Let us allow the American government to respond.”

US Secretary of State John Kerry tried to end the dispute in a phone call to India’s national security adviser on Wednesday, expressing regret and stressing that the issue should not be allowed to hurt a “vital relationship”.

India’s Parliamentary Affairs Minister Kamal Nath said “a mere regret won’t make us happy. They must offer a clear apology and accept that they made a mistake, that is what we will be satisfied with”.

Khobragade, India’s deputy consul-general in the US, was arrested, handcuffed and then strip-searched last Thursday, following a complaint that she had been paying nanny Sangeetha Richards less than $3 per hour, far less than the minimum wage stipulated in the US.

Richards deserted her employer and went missing in June this year.

Richards contacted Khobragade and demanded compensation failing which she threatened to go to US law enforcement agencies.

Despite the fact that the Indian government informed its counterparts in Washington about Richards’ actions, the US authorities seem to have disregarded the information and acted in conjunction with the nanny.

Preet Bharara, the US federal prosecutor handling Khobragade’s case, has insisted she was arrested discreetly, and was not handcuffed.

The US Marshals Service on Thursday also denied the diplomat’s claims, saying that she was strip-searched according to standard procedures, and put in a detention cell with other female detainees.

The allegations that Khobragade was strip-searched have caused outrage in India and prompted a series of reprisals, including the removal of protective barricades outside the American embassy.

In an interview with Indian television, Foreign Minister Khurshid acknowledged there was “a sense of hurt” over the treatment of the diplomat at a time when US President Barack Obama is looking to bolster ties with New Delhi.

“Things happen between friends, even things that are terrible,” he told the CNN-IBN network.

“My duty is not to allow anyone to damage relations, the relationship,” he also told reporters.

Khobragade’s father has pressed for his daughter’s release, saying he would go on hunger strike if action was not taken. 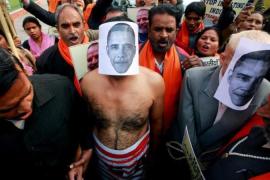 India-US row: What happened when

Looking back at the sequence of events that led to the worst diplomatic spat between New Delhi and Washington. 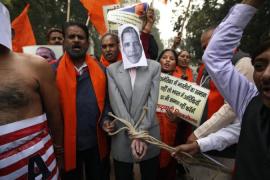 India-US row: Voices from the streets

Diplomatic spat between New Delhi and Washington over diplomat’s arrest has triggered strong emotions in both countries. 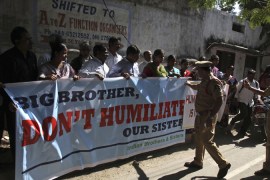 US moves to assuage India over envoy’s arrest

US pledges to review arrest of diplomat in New York, following outcry in India over her “public humiliation”. 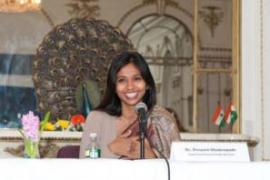 Diplomat’s arrest in New York over wage dispute with her maid escalates into spat between New Delhi and Washington.