A shooting incident at a high school in the US state of Colorado has resulted in the death of the shooter and injuries to at least two students, authorities say.

The shooting on Friday occurred at the Arapahoe High School in the town of Centennial, near the city of Denver. One student was in critical condition, while another suffered minor injuries, police said.

Grayson Robinson, the Arapahoe County Sheriff, said the suspect had apparently shot himself. He added the shooter had entered the premises of the school armed with a shotgun, looking for an individual teacher who he identified by name.

“The teacher began to understand that he was being looked [for] and exited the school,” Robinson said.

There's sirens. It's real. I love you.

When a student confronted the gunman, that student was shot and seriously wounded, police said.

The suspect was later found inside the school, dead of an apparently self-inflicted gunshot wound, Robinson said.

All schools in the area were put on lockdown, and parents of students at the school were asked to gather at a nearby church, the Arapahoe County Sheriff’s department said on its Twitter feed.

A hospital spokesperson confirmed that one student was in critical condition after the shooting in suburban Denver.

It was not immediately clear how the second student was injured.

Live television pictures showed orderly groups of students gathered on an athletics track on the the edge of a snow-covered field next to the school, which has over 2,200 students and 70 classrooms.

Tracy Monroe stood outside the high school looking at her phone, reading text messages from her 15-year-old daughter inside.

“There’s sirens. It’s real. I love you,” read one of the messages from Jade Stanton, sent shortly before 1pm local time.

Holly Schaefer, an 18-year-old senior at Arapahoe High School, said she was in mathematics class when she and fellow students heard a loud bang. That was followed shortly by another bang and “then we knew definitely it was a gunshot”.

Schaefer said her teacher immediately locked the door to the classroom as students huddled in a corner of the room.

After about 30 minutes, Schaefer said, they heard police calling out on the other side of the door. Officers eventually cleared the classroom and as students were being escorted out of the building, she said she saw blood on the hallway floor.

The Arapahoe high school is located about 13km east of Columbine High School in Littleton, where two teenage shooters killed 12 students and a teacher before killing themselves in 1999.

The site of the latest incident is also close to the town of Aurora, where a cinema shooting resulted in 12 deaths in July 2012.

The incident comes a day before the first anniversary of the Newtown, Connecticut shooting in which a mentally unstable gunman killed 26 people in the Sandy Hook elementary school, including 20 young children. 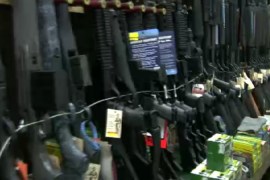 Jersey City to require gun manufacturers bidding for city contracts to answer a series of questions on gun safety. 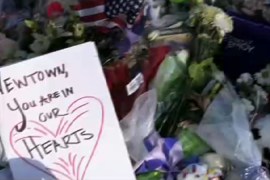