Thousands of people have massed in Bogota’s main square to support the Colombian capital’s leftist mayor, who was ousted this week for trying to fire private contractors.

Some of the demonstrators on Friday evening viewed Mayor Gustavo Petro’s dismissal as a blow to the country’s attempts to make peace with its main leftist rebel group, the Revolutionary Armed Forces of Colombia (FARC).

“[Petro was] the only leader who has worked on behalf of the poor,” said Adelmo Martinez, a 48-year-old schoolteacher.

What we have is a punishment that doesn't fit the crime.

Petro, a former member of the M-19 rebel movement, has also been barred from elected office for 15 years by Colombia’s inspector-general, a conservative ally of former President Alvaro Uribe.

Petro had alienated many since taking office last year with a high-handed, aloof style, and Inspector-General Alejandro Ordonez accused him of overreaching constitutionally.

As a senator, Petro led investigations that uncovered collusion between far-right militias and Uribe allies, helping to send dozens of officials to prison.

Al Jazeera’s Alessandro Rampietti, reporting from Bogota, said international pressure is mounting on the country to address the rationale for sentencing Petro to “political death.”

“The show of force we’re seeing today is very important to keep the pressure on,” our correspondent said.

The M-19 rebel movement’s 1990 peace pact is considered an inspiration for the government’s current talks in Cuba with FARC, and after this week’s announcement of sanctions against Petro, the group questioned how its members would be treated if an accord is reached.

FARC called the mayor’s dismissal “a serious blow” to the government’s credibility in the year-long negotiations, which have so far led to partial agreements on land reform and rebel political participation.

The official reason for Petro’s ouster was that he tried to fire private contractors in a failed bid to overhaul garbage collection in the capital.

“What we have is a punishment that doesn’t fit the crime,” said Navarro Wolff, a former M-19 rebel and Petro’s former chief of staff, although he did not believe the move would threaten peace.

To keep his job, Petro must file an appeal to Ordonez, and a final ruling could take weeks. 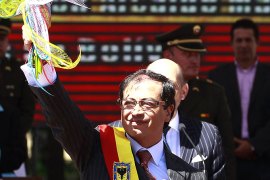 Former member of 19th of April Movement sworn in to second most important political post in Colombia after president. 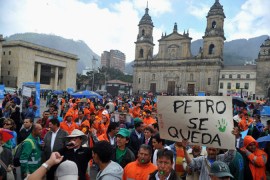 Mayor Gustavo Petro refuses to accept Colombian government’s decision to order him out and ban him from politics. 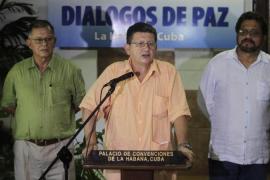 Colombia rebel group says it will examine government proposal that any peace deal must go to referendum.