The US National Safety Transportation Board has announced it will hold a two-day hearing to examine whether the pilots of a Boeing 777 were too reliant on technology when their plane crash-landed at San Francisco International Airport, killing three teenage girls and injuring scores of other passengers.

The South Korean airliner approached the airport too low and slow before it struck a seawall and skidded across the runway in July.

One Chinese teenager died in the crash, a second was run over by a fire truck on the tarmac and a third died later in hospital. More than 150 of the 307 passengers aboard Asiana Flight 214 were injured.

The pilot at the controls when the plane crashed was only halfway through his training and was landing the Boeing 777 for the first time. The co-pilot was also on his first trip as a flight instructor.

Investigators said the pilots of flight 214 relied on automated cockpit equipment to control the plane’s speed and, when they realised they were in trouble, it was too late.

The board said the hearing on the South Korean airliner crash will focus on “pilot awareness in a highly automated aircraft”.

Automation has brought many benefits to the aviation industry. But pilots have also become too reliant on automated cockpit systems. This over-reliance has played a role in dozens of crashes in recent years.

At least 61 passengers are suing the airline, according to federal court records.

The hearing is scheduled for Tuesday and Wednesday in Washington DC. 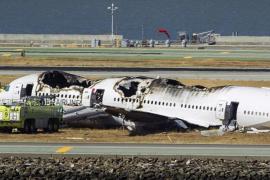 Airline says pilot was ‘in training’ on jet which crashed in San Francisco, killing two and injuring 182. 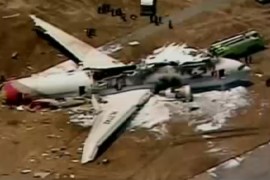 Calls to 911 by San Francisco Airport reveals the urgent need for more ambulances and medic.