Hundreds of protesters have demonstrated – some clashing with police – in Israel, the West Bank and Gaza Strip against an Israeli draft law seeking to evict Bedouin residents from the southern Negev desert.

The draft legislation was adopted by parliament in a first reading in June but it has to pass two more readings in the Knesset (parliament) before it becomes law.

Israeli police said clashes broke out at the main demonstration on Saturday in the Negev village of Houra where around 1,000 protesters had gathered as part of a campaign of “rage” against the bill.

People who have no land do not exist. We have been living here since before the creation of the state of Israel.

“Ten policemen were lightly hurt and 11 protesters were arrested,” she added.

Protesters said they have appealed plans by Israel to evict them from their homes.

“People who have no land do not exist. We have been living here since before the creation of the state of Israel (1948),” said 70-year-old demonstrator Maqbul Saraya.

“We have submitted a complaint to the court but we feel that democracy and justice in Israel do not apply to us,” he said.

The Israeli government’s Prawer-Begin plan, officially known as the Bill on the Arrangement of Bedouin Settlement in the Negev, will move the Bedouin from so-called unrecognised villages into government-planned towns, where poverty is high and services are few.

About 200,000 Bedouin currently live in the country’s southern Negev desert.

Half of those live in seven crowded Israeli townships, while the other half live in 35 villages, which lack basic services such as running water, electricity, paved roads or schools.

Israel says these villages are illegal, accusing the Bedouin of a conducting a land grab in the Negev.

The government says its proposal aims to modernise the Bedouin, and improve their quality of life. It says it has earmarked $340m – to be spread over the next five years – to support the community’s development.

But critics say the plan fails to recognise Bedouin land claims and ignores the community’s needs. It has been condemned internationally.

A group of 50 public figures in Britain signed a letter , published in the UK’s Guardian newspaper on Friday, opposing the plan as a means of “systematic discrimination and separation”.

Navi Pillay, the United Nations High Commissioner for Human Rights, said   in July that she was “alarmed” by the proposal.

She said it would “accelerate the demolition of entire Bedouin communities, forcing them to give up their homes, denying them their rights to land ownership, and decimating their traditional cultural and social life in the name of development”.

The demonstrations on Saturday are the third in a series of coordinated, one-day actions against the plan. 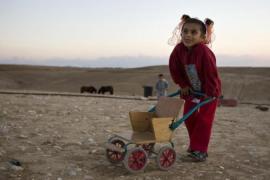 Bedouin in the Negev desert are fighting a government plan that could spell dispossession for thousands. 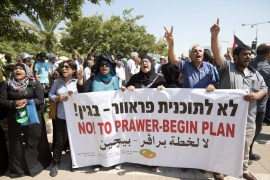 Israeli police crack down on demonstrations against planned forced evictions. 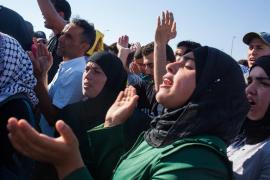 Hundreds gather to protest again plan to force up to 40,000 Bedouin into townships. 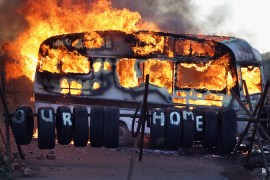 From Israel to Essex: Travellers not welcome