Protest leaders have pledged that anti-government rallies will resume in Thailand’s capital, Bangkok.

Suthep Thaugsuban, a former deputy prime minister, hinted at an end to the truce called in honour of the king’s birthday.

“We will only win if we have so many people that they can’t hurt us,” Thaugsuban said. “Come out by the millions to overthrow the government.”

He promised that Monday would be the last showdown with Yingluck Shinawatra’s administration, though he has made such vows in the past.

“If you don’t come out, we will have to accept our defeat,” said Thaugsuban, who faces an arrest warrant in connection with the protests.

He promised to “walk into jail” if millions don’t turn out.

He called on his followers to march through Bangkok to Government House, home of the prime minister’s office, but did not urge them to seize control of the complex.

Thai authorities, meanwhile, said that barricades around key state buildings in Bangkok would be rebuilt after two weeks of demonstrations saw five deaths and hundreds of injuries as tens of thousands took to the streets.

“I am confident that there will be no violent incidents on Monday,” Paradorn Pattnatabut, chief of the National Security Council, said.

The protests were called in opposition to a proposed amnesty bill, which many feared could pave the way for a return to power of Yingluck’s brother, Thaksin Shinawatra, a former prime minister. 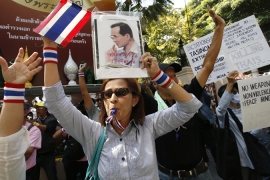 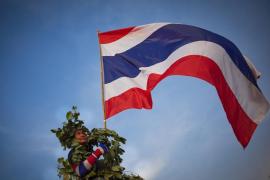 A temporary truce in Thai protests 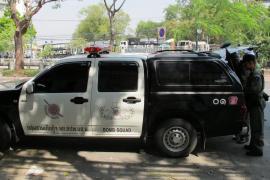