Anti-government protesters in Thailand have crossed heavily fortified barriers and reached the gates of the prime minister’s office without resistance from the police.

Hundreds of protesters poured onto the lawn of Government House in Bangkok, waving Thai flags and blowing whistles.

The surprise development eased the tensions in the Thai capital following three days of clashes between the security forces and demonstrators who seek to overthrow Yingluck Shinawatra, the Thai prime minister.

Earlier on Tuesday, police said they would no longer use force to defend their Bangkok headquarters from protesters.

Kamronwit Thoopkrajang, the Metropolitan Police Chief Lieutenant General, told AFP news agency that his officers would no longer try to fend off protesters at the police base.

“The Metropolitan Police Headquarters belongs to the public,” he said.

“There will be no use of tear gas today… Last night a police officer was injured by a gunshot so if we resist there will be more injuries, and we are all Thais.”

Police used cranes to remove concrete slabs and barbed wire barricades on a road leading to the city police headquarters.

Al Jazeera’s Scott Heidler, reporting from Government House, said that there was a carnival atmosphere around the building. He added that protest leaders called on the demonstrators not to enter the office yet.

He also said that Suthep Thaugsuban, the prominent opposition leader, said the recent development was not an overwhelming victory. Addressing the demonstrators by Government House he added the job was not done until Shinawatra regime was overthrown.

Thaugsuban escalated his campaign to topple the government and ordered his followers to storm the police headquarters in a defiant speech on Monday, hours before police took the initiative in question. The remarks came amid skirmishes between Thai security forces and opposition demonstrators.

The protests were ignited by an amnesty bill, which opponents feared would have allowed Thaksin Shinawatra, the former prime minister and Yingluck Shinawatra’s brother, to return to the country. He was removed from his seat in a 2006 coup.

Yingluck Shinawatra told Al Jazeera on Sunday that the government was no longer trying to pass the controversial bill that would have pardoned many people involved in corruption.

The country has been politically unstable since the 2006 coup.  In 2008, anti-Thaksin protesters occupied Bangkok’s two airports for a week after taking over the prime minister’s office for three months. In 2009, the office was held for 19 days by pro-Thaksin supporters.

A military crackdown on pro-Thaksin protests in 2010 resulted with death of 90 people. The current government came to power with a landslide election victory in 2011. 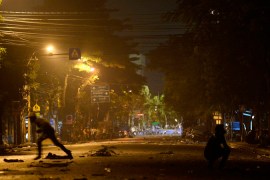 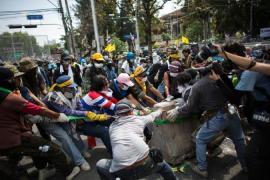