A court in Zambia has freed 54 separatists who were facing charges of treason for trying to create a new state called Barotseland in the west of the country.

The prosecution on Friday told magistrate Aridah Chulu that it had decided not to proceed with charges against the group, giving no further reason for its decision.

This is a victory for us the people of Barotseland and not for Zambia. It was all political and we are going back to our country.


“I hereby discharge you but would like to warn you that you may be arrested for the same offence,” Chulu told the activists.

A total of 84 defendants, mostly from the Lozi tribe, were rounded up in a recent crackdown on those campaigning for Barotseland, a state in the destitute west, to secede from the copper-rich southern African country.

Earlier this month the same court freed 30 separatists after the state again decided not to proceed with prosecution.

The release of the remaining 54 defendants was hailed by separatists as a victory for Barotseland.

“This is a victory for us the people of Barotseland and not for Zambia. It was all political and we are going back to our country,” said Muleta Kalaluka.

The secessionist bid dates back decades.

In January 2012 police broke up a secessionist meeting with live fire, igniting riots that left two people dead in the province’s largest town of Mongu. That incident rekindled secessionist energies, which had lain dormant since the 1990s.

President Michael Sata then ordered the military to deal with the movement.

Security forces arrested the 84 who were trying to hoist a Barotseland flag, and were chanting anti-government slogans.

Barotseland was originally a protectorate of Britain, but entered into a deal at the end of colonial rule in 1964 to become a province of Zambia.

Under the agreement signed with independent Zambia’s first president, Kenneth Kaunda, the region was supposed to have limited self-rule, but the Lozi say that agreement was never respected. 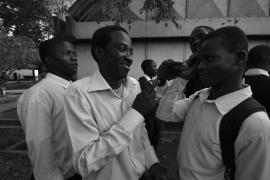 Alarmed by the number of deaf students contracting HIV/AIDS, outreach programme moves to help those at risk.