Separatist Tuareg rebels say they have ended a five-month-old ceasefire with Mali’s government and are taking up arms following violence in Kidal.

The declaration on Friday came a day after Malian troops clashed with stone-throwing protesters who blocked a visit by Oumar Tatam Ly, Mali’s prime minister, to Kidal, a rebel-controlled northeastern town.

Several demonstrators were wounded but there were conflicting accounts of how the incident started.

“The political and military wings of the Azawad declare the lifting of the ceasefire with the central government in Bamako,” said a statement by Attaye Ag Mohamed, one of the founders of the MNLA, or the National Movement for the Liberation of Azawad.

“All our military positions are on alert.”

What happened (on Thursday) is a declaration of war. We will deliver this war.

Mahamadou Djeri Maiga, vice-president of the National Movement for the Liberation of Azawad


The West African country is in the process of returning to civilian rule after a Tuareg uprising that led to a coup last year and the occupation of the north of the country by al-Qaeda-linked fighters.

A French-led military offensive routed the forces but tension remains between the central government and Tuareg separatists demanding an independent homeland they call Azawad.

Protesters said Malian soldiers shot at “women and children who were demonstrating peacefully”.

The Tuareg rebels said one person was killed, while three women and two children were injured. One of the women is in a serious condition.

The Malian government, however, said its troops – “taken to task by uncontrollable elements” – fired warning shots after they had been shot at and hit with stones.

“What happened [on Thursday] is a declaration of war. We will deliver this war,” Mahamadou Djeri Maiga, MNLA’s vice-president, said.

“Wherever we find the Malian army we will launch the assault against them. It will be automatic. The warnings are over.”

Under the June peace pact that allowed the government to return to Kidal in advance of elections, the rebels remain in Kidal but were required to return to their barracks under the supervision of UN peacekeepers, stop carrying arms in public and dismantle all roadblocks.

The two sides were due to open further negotiations over the status of the desert region.

A senior French military official told Reuters news agency his force would wait to see how things played out on the ground, but had no further reaction to the MNLA announcement.

Before the Tuareg declaration, the UN peacekeeping mission in Mali known as MINUSMA had condemned the violence in Kidal and called for a return to the negotiation table. 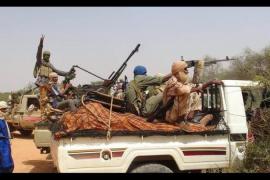 Azawad’s rebels feel compelled to fight for independence and right the historical wrong of French colonialism. 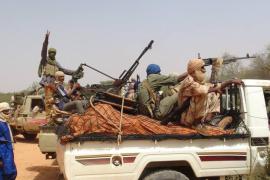 The Tuareg and Arab rebels, fighting for an independent state, are currently in negotiations with Mali’s government.