Anti-government demonstrators plan to march towards the headquarters of Thai Prime Minister Yingluck Shinawatra’s ruling party on Friday, forging ahead with a campaign to overthrow her after rejecting her call for dialogue.

Yingluck breezed through a parliamentary no-confidence vote on Thursday but that failed to pacify protesters who accuse her of abusing her party’s majority to push through laws that strengthen the behind-the-scenes power of self-exiled brother and former premier, Thaksin Shinawatra.

Hours later, on Thursday, she appealed to protesters to end their sit-ins at ministry buildings across the capital, Bangkok.

“I propose to protesters to stop protesting and leave government offices so the civil service can move forward,” she said.
“The government does not want confrontation and is ready to cooperate with everybody to find a solution.”

Demonstrators responded to her call by cutting the power to the country’s national police headquarters, showing that the vote was unlikely to end the biggest anti-government protests since deadly political unrest three years ago.

Police officers have so far been restrained in dealing with the thousands of protesters that have come onto the streets across the city.

The military has also not been deployed, seemingly in a bid to avoid the bloodshed that marked protests in 2010.

Protesters also demonstrated outside the Defence Ministry on Thursday.

The DSI, located in a complex of key government offices, recently indicted Suthep Thaugsuban, the protest leader, for his alleged role in the deaths of more than 90 people in the 2010 military crackdown targeting supporters of Thaksin.

Thaksin was deposed in a 2006 military coup and fled the country to avoid a two-year prison term on a corruption conviction.

He continues to sharply divide the nation, with his supporters and opponents battling for power.

Al Jazeera’s Looi said the Chinese ambassador had offered to mediate between the two sides.

Boonpracong said the disruption of key services in the capital was unnecessary, given that elections are due in 2015. 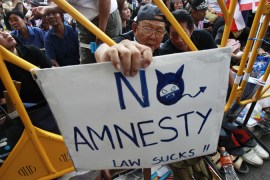