Protests erupted outside an Israeli court as prison sentences were handed down to seven Palestinian citizens of Israel convicted of beating a Israeli soldier to death after he carried out a shooting spree on a bus in 2005.

A Haifa district court judge said on Thursday that despite the soldier’s actions, Israel could not tolerate vigilante justice, or an “eye-for-an-eye” defence.

Six men were sentenced to between eight months and two years in prison, while another was given a suspended sentence and released on probation.

Eden Natan-Zada, a 19-year-old soldier, killed four Palestinian citizens of Israel in 2005 after opening fire aboard a bus in Shfaram, a Palestinian town in northern Israel.

Another 22 people were injured, before a group of passengers killed Natan-Zada immediately after the attack.

Natan-Zada was reportedly distraught over Israeli plans to evacuate Jewish settlements from the occupied Gaza Strip.

Israeli security officials later said he had hoped to spur sectarian violence in Israel in an effort to derail the Gaza withdrawal, which went ahead weeks later.

Siry Khourieh, defence lawyer, argued during the trial that the men had acted in self-defence. He said the defence would appeal for Thursday’s sentence to be overturned.

“In our opinion, we are speaking about an exaggerated punishment and a very serious one. According to the indictment we think that the Supreme Court will take its time and will give them a more appropriate sentence,” Khourieh said.

The case has drawn an angry response from Israel’s Palestinian citizens, which viewed the arrests as an injustice against the community targeted in Natan-Zada’s deadly attack.

Dozens of Shfaram residents demonstrated outside the court and chanted in support of the seven men on Thursday.

Jamal Zahalka, a Palestinian member of the Israeli parliament, the Knesset, called the sentences “an aggressive message to the Arab citizens of Israel”.

“It is a message that says that the Arabs can’t defend themselves, that Arab blood is worthless. We don’t accept that and will keep protesting until they are released from jail,” Zahalka said.

Mohamed Barakeh, another Palestinian lawmaker, said: “This is an attempt to punish the victims. The convicted men are on the side of the victims, of those four people who are now in the ground.” 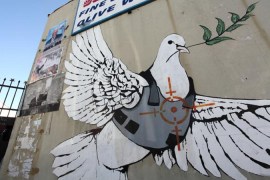 Palestinian graffiti is still a key means of communication and an integral voice against Israel’s occupation. 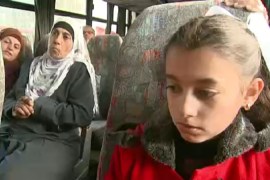 Adult family members of at least a third of detainees do not receive permits to visit their loved ones in Israeli jails. 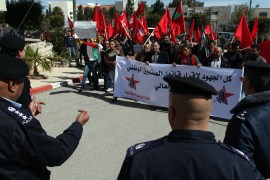 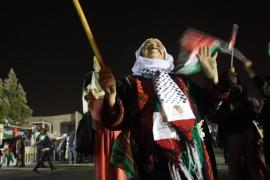 The 26 Palestinians had been held by Israel since before the Oslo Accords were signed in 1993.