Honduras’ electoral tribunal has declared Juan Orlando Hernandez the clear winner of the country’s presidential elections, despite persisting allegations of fraud from the opposition candidate.

Figures from 81.5 percent of polling stations tallied Wednesday gave Hernandez, a conservative, 35.88 percent of the vote, compared to 29.14 percent for his rival, Xiomara Castro.

“These numbers that we released today clearly indicate that the winner of the general election is Juan Orlando Hernandez,” David Matamoros, president of the Supreme Electoral Tribunal, said.

“In the coming days, we will issue the official declaration, once we have added the records that are needed.”

Castro has accused the Supreme Electoral Tribunal of manipulating 19 percent of the votes to favor Hernandez. Her campaign has called for massive protests over the alleged fraud.

“On Saturday, we are going to summon people to protest. The Libre [Party] and Xiomara [Castro] have been robbed of their victory, and we are going to show it,” Castro’s husband, ex-president Manuel Zelaya, told Radio and TV Globo.

In a Twitter post on Tuesday, Castro said: “We will defend the will of the people as it was expressed at the polls.”

The governments of Colombia, Guatemala, Panama and Costa Rica congratulated Hernandez on his victory, while Nicaragua’s leftist President Daniel Ortega also recognised Hernandez as the winner.

Tensions were running high as the political standoff again spread to the streets with protests by about 400 students.

On Tuesday, police beat and used tear gas against about 800 pro-Castro protesters.

About 100 police in helmets and riot gear used gas and then truncheons to beat the chanting youths.

The clash between Hernandez and Castro brought new uncertainty to a country reeling from gang violence, poverty and the wounds of a 2009 coup that removed Zelaya from his seat.

Known as one of the world’s deadliest nations, gangs are known to run whole neighbourhoods, extorting businesses as large as factories.

Drug cartels have used Honduras as a transfer point for shipping illegal drugs, especially cocaine, from South America to the US.

Honduras is the poorest country in the Americas after Haiti with the majority of the population living in poverty. 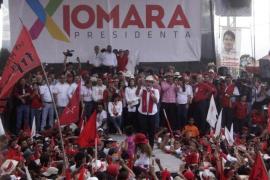 The fight to take power in Honduras

Voters head to the polls on Sunday, in the first election contested by the opposition since the 2009 coup. 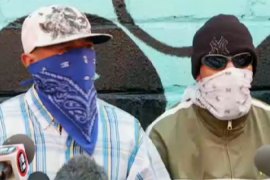 Promise by two main gangs to halt violence in exchange for job training fails to make a dent in murder rates. 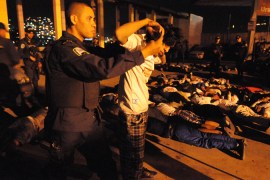 Honduras: A culture of impunity

Is the US state department misleading Congress about possible US funding for Honduran death squads? 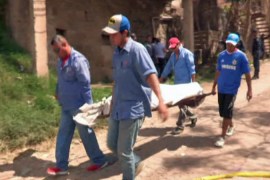 Since 2010, more than 2,600 young people have died, many risking their lives to work for drug gangs.