January – US President George W Bush describes Iraq, Iran and North Korea as an “axis of evil”, warning of the proliferation of long-range missiles being developed in these countries. The speech causes outrage in Iran and is condemned by reformists and conservatives alike.

November – Iran says it is suspending its uranium enrichment programme and will allow tougher UN inspections of its nuclear facilities. The IAEA concludes there is no evidence of a weapons programme.

June – Iran is rebuked by the IAEA for failing to fully cooperate with an inquiry into its nuclear activities.

November – Iran agrees to suspend most of its uranium enrichment under a deal with the EU.

August-September – Tehran says it has resumed uranium conversion at its Isfahan plant and insists the programme is for peaceful purposes. The IAEA finds Iran in violation of the nuclear Non-Proliferation Treaty.

April – Iran says it has succeeded in enriching uranium at its Natanz facility.

IAEA says Iran has begun making nuclear fuel in its underground uranium enrichment plant. It also says that Iran has started up more than 1,300 centrifuge machines.

May – IAEA says Iran could develop a nuclear weapon in three to eight years if it so chooses.

Iran agrees to allow inspectors to visit the Arak nuclear plant following talks with the IAEA.

October – The US announces sweeping new sanctions against Iran, the toughest since it first imposed sanctions almost 30 years ago.

December – A new US intelligence report plays down the perceived nuclear threat posed by Iran.

May – IAEA says Iran is still withholding information on its nuclear program.

June – EU foreign policy chief Javier Solana presents an offer of trade benefits, which Tehran says it will look at, but will reject if it demands suspension of uranium enrichment.

July – Iran test-fires a new version of the Shahab-3, a long-range missile it says is capable of hitting targets in Israel.

August – Informal deadline set by western officials for Iran to respond to package of incentives in return for halt in nuclear activities passes without reply.

Iran says it has successfully launched a test rocket capable of carrying a satellite into space.

November – In an unprecedented move, President Mahmoud Ahmadinejad congratulates US president-elect Barack Obama on his election win. Obama offers to open unconditional dialogue with Iran about its nuclear programme.

February – Speaking on the 30th anniversary of the Islamic revolution in Iran, Ahmadinejad says he would welcome talks with the US as long as they are based on “mutual respect”.

May – Iran rejects a US state department report saying it remains the “most active state sponsor of terrorism” in the world.

September – Iran admits that it is building a uranium enrichment plant near Qom, but insists it is for peaceful purposes

The country test-fires a series of medium and longer-range missiles that put Israel and US bases in the Gulf within potential striking range.

February – Iran says it is ready to send enriched uranium abroad for further enrichment under a deal agreed with the West. The US calls on Tehran to match its words with actions.

November – A recent IAEA report, based on the intelligence of 10 governments, presented images, letters and diagrams that suggested Iran was secretly working on nuclear weaponry. Iran’s envoy to the IAEA says any nuclear development is for peaceful means and that the material evidence against has been fabricated by the US.

January – Iran says its scientists have “tested first nuclear fuel produced from uranium ore deposits inside the country”. The IAEA confirms that Iran has started enriching uranium at Fordo to purities of 20 per cent.

The European Union announces a ban on Iranian oil, along with sanctions against Iran’s central bank.

February – Ahmadinejad unveils what is said to be Iran’s first domestically produced, 20 per cent enriched nuclear fuel for Tehran’s research reactor and says 3,000 more centrifuges had been added to the uranium enrichment effort.

Iran also activated a new generation of centrifuges that it said increased its enrichment capacity by three times.

The chief UN nuclear inspector returns from a second visit to Iran, saying his team was not given access to the Parchin military site where Tehran is alleged to have carried out tests aimed at developing nuclear warheads

May – Talks among Iran and six world powers stall.

February – As a new round of US sanctions on Iranian oil takes effect, the state news agency IRNA quotes a report citing significant new deposits of raw uranium.

Talks among Iran and six world powers end without a deal.

May – The IAEA says Iran has made considerable progress on its nuclear programme, but has not passed the “red line” set out by Israel.

September – After a moderate address to the UN, Iran’s new president, Hassan Rouhani, speaks with the US president – the first such contact in decades.

US President Barack Obama expresses optimism for a deal.

October – Iran and six world powers engage in another round of nuclear talks.

November – Iran and six world powers reached a breakthrough agreement in Geneva to curb Tehran’s atomic ambitions in exchange for limited sanctions relief, in a first step towards resolving the dangerous decade-old standoff. 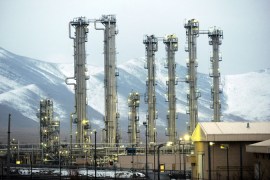 The US is not taking any practical steps to ensure a nuclear-free Middle East, says the author. 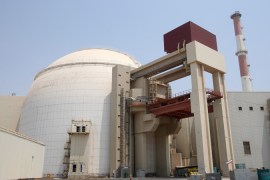 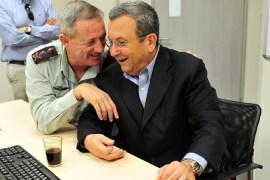 Iranian nuclear programme not about Israel