Chinese industrial safety is again in the spotlight after an explosion in the east of the country killed at least 47 people and contaminated seawater.

Leaked oil from a ruptured pipeline ignited as workers cleaned up the spill, local authorities said, shattering roads, flinging bodies across streets and shutting down a key port.

The pipeline, owned by Sinopec, China’s largest oil refiner, was leaking onto a city street in Qingdao, Shangdong province, and into the sea for about 15 minutes before it was shut off on Friday.

One blast went off at a major road junction in Qindao, formerly known as Tsingtao, and photos posted online showed shattered concrete slabs and human bodies scattered across the street.

Black smoke rose above gigantic fuel silos and darkened much of the sky. At least 136 people were admitted to hospital following the explosion.

It was China’s second deadliest industrial accident this year, after 121 people were killed in a chicken factory fire in June in the north-eastern city of Jilin.

“[We] are deeply grieved, we express our deep condolences for the dead, our support to their families … and our apologies to the whole country,” Fu Chengyu, Sinopec chairman, said.

“[We will] find out the accident’s causes as soon as possible and give a reasonable explanation to everyone.”

President Xi Jinping urged local officials to go all out in finding missing people, treating the injured and in finding the cause of the accident, according to state TV.

The Qingdao Environmental Protection Bureau said barriers had been set up to contain the oil as it spread into the sea, but that a mixture of gas and oil from a storm sewer exploded and caught fire over the sea.

The oil had seeped into underground utility pipes, which could have been a factor in the blasts, said officials.

Oil tankers from West Africa, the MIddle East and Brazil were held up waiting to enter Qingdao, but the disruption appeared to have little effect on global oil prices.

Around 28,000 people were killed or went missing in workplace accidents in the first half of this year, state media has reported. 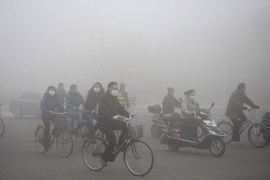 As thick smog envelopes China’s northeast, we ask whether the government is acting fast enough to contain the crisis. 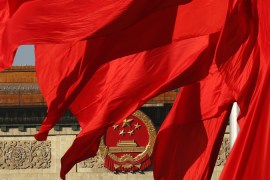 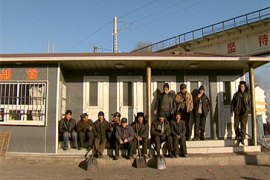