The captain of the Greenpeace ship Arctic Sunrise has been released on bail by a Russian court.

Captain Peter Willcox, along with British activist Anthony Perrett, was among the last Greenpeace activists awaiting bail hearings in St Petersburg, after 10 were released on Thursday.

The environmental campaigners were among 30 people arrested after a protest at an offshore oil rig in Arctic waters two months ago.

Two more are expected to be granted bail today.

“I would do this again,” Perrett said.

Officials in Moscow have defended the jailing of the campaigners.

“Do they have noble goals? Yes, they do. Do they do the right thing when they climb up on to the platform? No,” President Vladimir Putin said.

He said the activists jeopardised the safety of the oil rig, owned by state natural gas giant Gazprom.

“Several years ago in a northern sea on an American platform, a tragedy happened: an engineer made a mistake, after a fire had started and 167 people died,” Putin said.

“Everybody. Because of a mistake of the engineer. When somebody climbs up to the platform and creates a distraction, more than one mistake could be made as all the workers start to look away from their job. Also we had divers under water, their lives were in danger.”

“I try and do something about Putin, I’d love to go and meet him and speak to him,” said protester and fashion designer Dame Vivienne Westwood. “He’s a monster.”

Russia has faced international criticism over its handling of the protesters, who were initially charged with piracy after their arrest on September 18.

“… A very important, significant important part is now shared by a civil society, including Greenpeace,” he said. “Therefore, the government leaders should listen attentively what their aspirations and what their concerns are.”

David Haussman from New Zealand was released on Thursday, along with Russians Andrei Allakhverdov, Yekaterina Zaspa and Denis Sinyakov, as well as Camila Speziale from Argentina, Tomasz Dziemianczuk from Poland, Anne Mie Jensen from Denmark, Sini Saarela from Finland, Cristian D’Alessandro from Italy, and Francesco Pisanu from France.

The group will not be allowed to leave the country until criminal proceedings against them end, said Russia’s Federal Migration Service. If convicted, they face potential prison sentences of up to seven years.

Greenpeace has pledged to “continue to keep up public pressure to get them released”, said Kumi Naidoo, the organisation’s executive director.

Meanwhile, 200km from the coast of New Zealand, a tiny Greenpeace ship is among a small flotilla attempting to disrupt the activities of a much larger oil drilling ship off the Raglan Coast, where Noble Corporation, contracted to Texan oil giant Anadarko, intends to drill New Zealand’s deepest exploratory oil well.

“We are here in defence of our ocean, future generations, our climate and our coastlines,” Bunny McDiarmid of Greenpeace said. 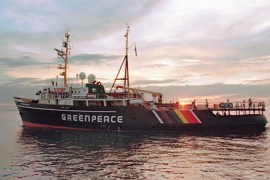 Greenpeace: From hippies to lobbyists

It has offices in 40 countries, nearly three million members and a $150m budget, but where did it all begin? 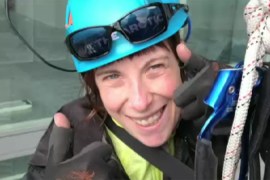