A judge has denied a petition to release the alleged Silk Road founder Ross Ulbricht from jail before his trial, concluding that the bail proposal his defence team presented was not strong enough to dispel worries that the 29-year-old would flee or take violent action.

Following the judge’s ruling on Thursday, disappointed sighs were heard from a few members of Ulbricht’s family who attended the hearing.

Ulbricht’s lawyer had proposed a bail package worth $1mn that restricted Ulbricht’s movements and cut off his access to the internet.

But a Manhattan federal prosecutor argued there was reason to believe Ulbricht would try to leave the country if released, and that his alleged participation in six murder-for-hire plots rendered him too dangerous to remain outside of jail.

There are a lot of gaps in the government’s information gathering that we are going to have to explore and probe to see how that occurred and whether that was lawful or not.

“There are a lot of gaps in the government’s information gathering that we are going to have to explore and probe to see how that occurred and whether that was lawful or not,” said Joshua Dratel, Ulbricht’s lawyer.

The government recently admitted using NSA information in two domestic terrorism trials, but so far not in the Ulbricht case.

Ulbricht was arrested in San Francisco on Oct 1 and charged in federal court in Manhattan with counts relating to drug trafficking, money laundering and computer hacking, all stemming from his alleged involvement in the anonymous internet marketplace Silk Road, which sold drugs and criminal services in exchange for the digital currency Bitcoin.

After Ulbricht’s arrest, the government shut down the website.

Ulbricht is also facing charges in federal court in Maryland relating to a murder-for-hire plot.

At Thursday’s hearing, Assistant US Attorney Serrin Turner told Magistrate Judge Kevin Fox that Ulbricht had tried to have a total of six people killed, transacting with at least two hitmen, one of whom was an undercover agent.

Turner also said federal agents analysing a laptop seized from Ulbricht at the time of his arrest had found a diary he kept detailing his creation of Silk Road.

“The evidence in the government’s view is absolutely overwhelming against the defendant,” Turner said. 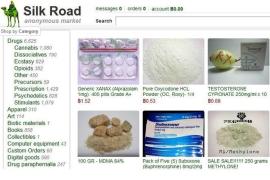