Indonesians have burned Australian flags over reports that Australian spies tried to tap the phones of President Susilo Bambang Yudhoyono and his wife.

About 200 people marched on Thursday to the heavily fortified Australian embassy in Jakarta to demand an apology over the alleged spying, which prompted Yudhoyono to downgrade diplomatic relations with Canberra a day earlier.

“We are ready for war with Australia,” stated one of many banners carried by protesters.

Other protesters in the central Javanese city of Yogyakarta burned Australian flags in a show of anger, but the demonstrations were peaceful and smaller than police expected.

Yudhoyono appeared on national television on Wednesday to announce a freeze on military and intelligence cooperation, including over the controversial issue of asylum seekers.

Tony Abbott, the Australian prime minister, has not confirmed the spying or apologised, although he has expressed regret for the embarrassment the media reports caused to Yudhoyono and his family.

In a statement to parliament on Thursday, Abbott said he had received an official letter from Yudhoyono seeking an explanation for the spying reports and would respond “swiftly, fully and courteously”.

“In the area of economy and business, our cooperation is continuing,” he said.

Indonesia is a major importer of Australian agricultural products, such as live cattle, while Australia is Indonesia’s 10th biggest export market. 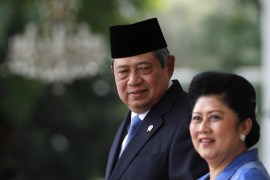 Areas like people-smuggling, defence drills and intelligence sharing to be affected by reaction to phone-tapping.