Michelle Bachelet has won a first round of country’s presidential race, with voters putting her on track to replace the conservative government after a likely runoff next month, according to partial results.

Bachelet, who led Chile between 2006 and 2010 as its first woman president, had 46.7 percent support with 92 percent of votes counted on Sunday night.

Her second-place rival, Evelyn Matthei, the candidate for the right-wing governing coalition, had 25 per cent of the votes, while seven other candidates trailed far behind.

“We knew that it would be tough to win on the first round, we worked really hard, and we almost did it,” Bachelet told supporters late on Sunday. “We did win tonight, and we are going to work hard to win comfortably in December.”

Matthei and Bachelet were trailed by independent economist Franco Parisi and Socialist Franco-Chilean filmmaker Marco Enriquez-Ominami, at about 10 percent each, the early returns showed. The run-off will be held on December 15.

Voters also went to the ballots for congressional elections on Sunday.

According to projections, Bachelet’s bloc will hold 67 of the 120 seats in the Lower House, and 21 of the 38 Senate seats, up from roughly 57 and 20 respectively.

Her coalition failed to secure the four-sevenths majority required for education reform, a hot-button issue which has triggered massive protests, and fell short of the three-fifths necessary for electoral reform as well as the two-thirds needed to strike down the constitution which dates from Augusto Pinochet’s military rule.

“Social movements that have spilled onto the streets are demanding reform, yet the limits of the institutional structure of Chile are going to limit her capacity to engage in reform. Even though Bachelet may be the winner tonight she is not in an enviable position.”

A pediatrician by training, Bachelet, 62, seeks to overhaul the country’s political and economic system, a legacy of Augusto Pinochet’s 1973-1990 military dictatorship, during which she was briefly a political prisoner.

Her father, an Air Force Brigadier-General, was tortured and killed by Pinochet’s regime.

She has pledged to bring a “new cycle” of reforms to reverse the country’s wide income gap.

Chile has the highest GDP per capita in Latin America – $22,362 based on purchasing power parity – but half of the nation’s 17 million people make less than $500 per month.

The 62-year-old wants to raise business taxes to offer free university, answering the demands of a powerful student movement that led a series of massive protests since 2011.

The Andean country moved to a voluntary voting system from a compulsory one last year, creating a degree of uncertainty in electoral forecasts. 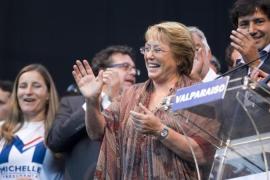 Chile at a crossroads

Voters choose between nine different presidential candidates – but some may just stay home. 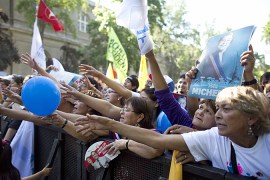 The other side of Chile’s ‘economic miracle’

On the eve of elections, Chileans in Aysen province are demanding action on economic inequality. 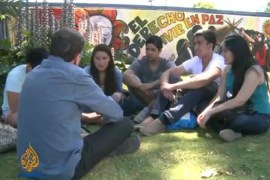 Protests against uneven distribution of wealth spread to rest of society as South American country goes to the polls. 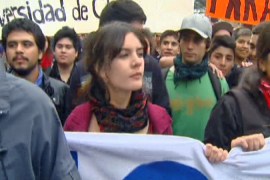 Student leader made famous worldwide after 2011 protests changes gears to run for seat in Congress.